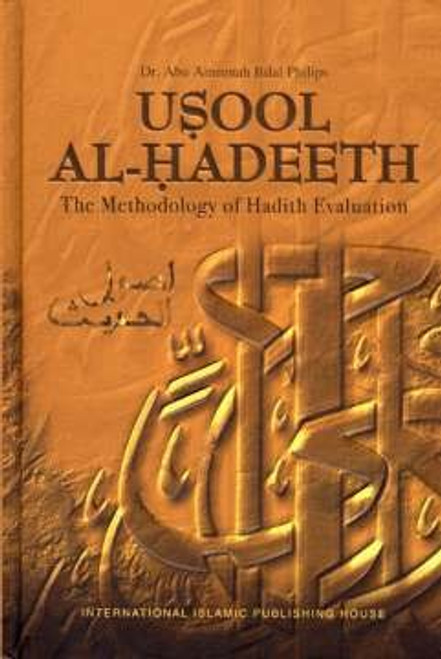 In Usool al-Hadeeth, the reader will embark on a course of study that will, Allah willing, enable him or her to make critical and intelligent use of the body of Hadith literature in his or her daily life.

The science of Hadeeth is an independent Islaamic science which is not understood by many today. Their ignorance has led them to reject the Sunnah of Prophet Muhammad (PBUH). This text covers all of the most important areas of the discipline of Hadeeth in a simplified language and with sufficient examples. Dr. Bilal Philips writes: "The Prophetâ€™s sayings and actions were primarily based on revelation from Allah and, as such, must be considered a fundamental source of guidance second only to the Qurâ€™an." According to Dr. Philips, the Hadith, the record of these sayings and actions, plays a vital role in that it transmits revelation, tafseer (exegesis of the Qurâ€™an), Islamic law, and the Islamic moral ideal. For instance, the Prophetâ€™s "...character and social interactions became prime examples of moral conduct for Muslims. Consequently, the daily life of the Prophet (blessings and peace of Allah be upon him) as recorded in the hadith represents an ideal code of conduct. It is largely due to the science of hadith that the final message of Islam has been preserved in its original purity for all times."

Stories From the Hadith - Qasas al-Hadith

A Muslim View of Christianity- Essays on Dialogue

Spiritual Disease And It's Cure (E-Book)