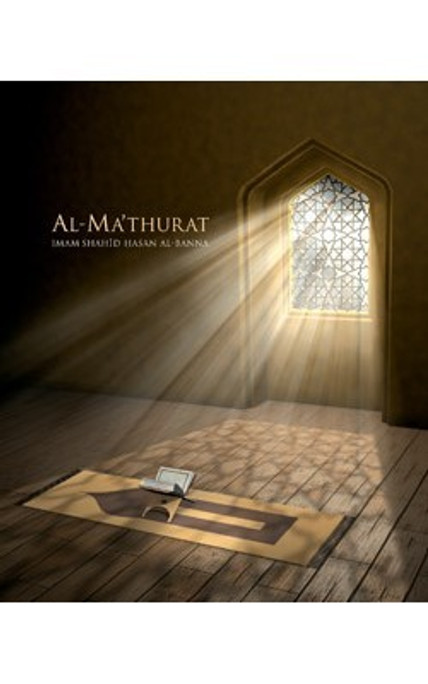 
Al-Mathurat is a compilation of important Qurâ€™anic verses and the authentic ahadith. It is presented in the form of a â€œWirdâ€ (litany) to be recited every morning and evening. Al-Mathurat was compiled by Imam Shahid Hasan al-Banna, the founder of the Muslim Brotherhood, who strove to establish the perpetual remembrance of Allah in all spheres of life. For truly, such is the way for the hearts to attain spiritual equilibrium and tranquility Extract: Etiquette of Dhikr Dhikr is not only limited to words; repentance is dhikr, reflection is dhikr, seeking knowledge is dhikr, seeking lawful provisions (provided that the intention is correct) is dhikr and generally, every lawful act during which the presence of Allah is felt is dhikr. For dhikr to bear fruit, the following etiquettes of dhikr should be observed: i) Humility, sobriety and pondering over the meanings of the dhikr and the dua. ii) Lowering ones voice as much as possible so as not to disturb others but at the same time one must be completely awake. As Allah says: "And remember your Lord by your tongue and within yourself, humbly and with fear without loudness in words in the mornings, and in the afternoons and be not of those who are neglectful." iii) Abiding by the sequence of the group if the dhikr is performed collectively. One should not be too fast nor too slow in observing the sequence; but rather keep up with the pace of the group. iv) Cleanliness and respectability of clothes and the place of dhikr. By observing these guidelines, one will find happiness in his heart, light in his soul and blessings from Allah. Imam Shahid Hasan al-Banna Imam Hasan al-Banna born in Egypt (1906-1949). He is the founder of al-Ikhwan al-Muslimun (The Muslim Brotherhood) - the largest Islamic Movement of our time. He studied Hadith, Fiqh and other Islamic Sciences under his father Shaykh Abdur Rahman al-Banna and under many other notable scholars. He graduated from Darul Ulum, Cairo and worked for many years as a teacher. Due to his dawah and revival efforts Imama al-Banna is considered by many Muslim scholars and thinkers as the mujaddid (reviver) of the 20th Century. He was assassinated and martyred in 1949.