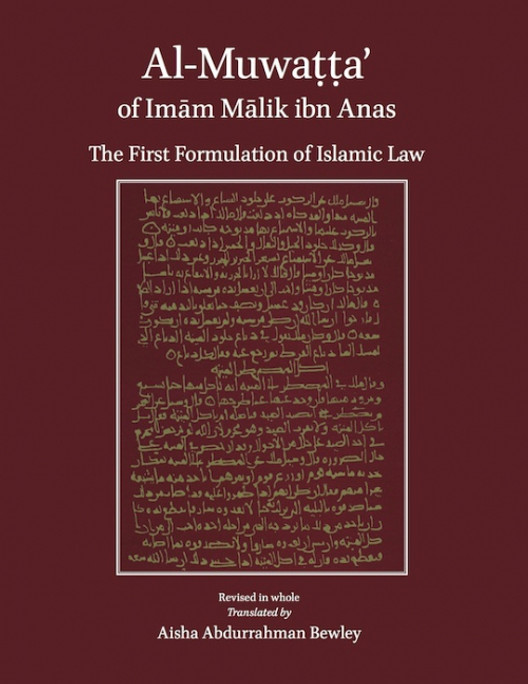 The first formulation of Islamic Law based on the behaviour of the people of Madinah during the time of the great Companions, Al-Muwatta is the blueprint for a just and radiant society.

The first formulation of Islamic Law based on the behaviour of the people of Madinah during the time of the Prophet, may Allah bless him and grant him peace, and the great Companions,Â Al-MuwattaÂ is the blueprint for a just and radiant society: the earliest, clearest, cleanest record of salafi Islam.

It is the first of the sahih works, long pre-dating al-Bukhari and Muslim.

Al-Bukhari regarded the transmission of Imam Malik narrating from Nafiâ€˜ from â€˜Abdullah ibn â€˜Umar from the Messenger of Allah, may Allah bless him and grant him peace, as being â€˜the Golden Chain of Transmissionâ€™.

Abu Dawud, whoseÂ SunanÂ is another of the Six Books of hadith, addedÂ â€œthen Malik, from az-Zuhri, from Salim, from his father [i.e. Ibn â€˜Umar],Â then Malik, from Abu z-Zinad, from al-Aâ€˜raj, from Abu Hurayrahâ€, without mentioning anything from anyone other than Malik.

Ibn Hajar said, â€œâ€¦ some imams say that they are unqualifiedly the soundest of isnads, such as az-Zuhri i.e. the hadith which az-Zuhri â€“ who is better known as Ibn Shihab â€“ narrated from Salim i.e. transmitting to him from Salim ibn â€˜Abdullah ibn â€˜Umar from his father. The school of Ahmad [ibn Hanbal] and Ibn Rahwayh is that this is unqualifiedly the soundest chain of transmissionâ€.Â

Ash-ShÄfiâ€˜Ä« said, â€œAfter the Book of Allah, there is no book on the face of the earth sounder than the book of MÄlik.â€

Ibn á¸¤ajar said, â€œThe book of MÄlik is sound by all the criteria that are demanded as proofs in theÂ mursal,Â munqaá¹­iâ€˜Â and other types of transmission.â€

Al-BukhÄrÄ« and Muslim transmitted most of itsÂ á¸¥adÄ«thsÂ and included them in theirÂ á¹¢aá¸¥Ä«á¸¥Â collections. The authors of the rest of the six books, the ImÄm of theÂ á¸¥adÄ«thÂ scholars, Aá¸¥mad ibn á¸¤anbal, and others did the same.

In addition, theÂ Muwaá¹­á¹­aâ€™Â Â contains a record of the practice (â€˜amal) of the people of MadÄ«nah of the first generations, a transmission of the ethos that permeated the city, and ImÄm MÄlikâ€™s painstaking clarification of the Sunna, theÂ á¸¥adÄ«ths, the practice and legal judgements.

He is recognised to be the subject of the hadith from AbÅ« Hurayra Ã®:

â€œThe Messenger of Allah, peace be upon him said, â€˜There will come a time when the people will beat the livers of their camels in search of knowledge and they will not find anÂ â€˜ÄlimÂ with more knowledge than theÂ â€˜ÄlimÂ of MadÄ«na.â€™â€

She is co-translator, with her husband Shaykh Abdalhaqq Bewley, ofÂ The Noble Qurâ€™an, a New Rendering of its Meaning in English.

Other works include her translation ofÂ The Meaning of ManÂ of Sidi Ali al-Jamal,Muhammad Messenger of Allah â€“ ash-Shifa of Qadi â€˜Iyad, Muhammad ibn Saâ€˜dâ€™s Kitab at-Tabaqat al-Kabir,Â and of her own authorship:Â Muâ€˜awiya â€“ Restorer of the Muslim Faith,Â A Glossary of Islamic Terms,Â Islam: The Empowering of WomenandÂ Muslim Women, a Biographical Dictionary.