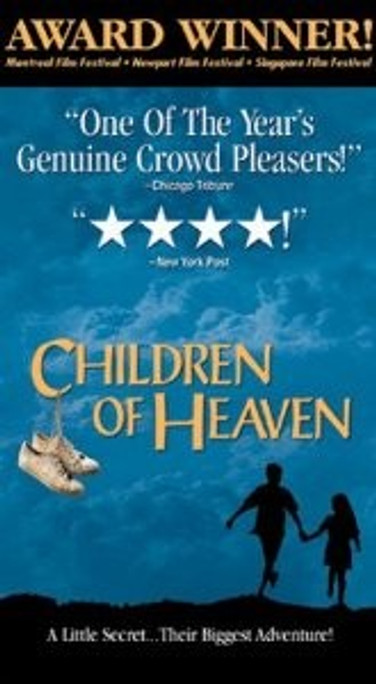 
This 1997 film is from Iran. And its the kind of film that the whole family can enjoy. Its about a 9-year old boy who loses his 7-year old sisters shoes through no fault of his own. They are very poor and they both want to keep it a secret from their parents. And so they share his only pair of worn-out sneakers. She wears them to school in the morning, and then runs through the streets, gives him the shoes and he wears them in the afternoon. Such a plan is not without its challenges, however. She almost loses a shoe when it falls into a gutter. Hes late for school. The shoes are worn. Both of them crave a pair of their own.
Amir Farrokh Hasherman is cast as the boy. He has the biggest, most expressive eyes Ive ever seen and my heart immediately went out to him. Bahare Seddiqi is the little sister. She wears a long dress and a white head covering just like all the other little girls. Its their shoes that show their individuality and she is always looking at all the other little girls feet. One day she sees a little girl wearing her own lost shoes, but the other little girl is the daughter of a blind beggar. Later, there is a footrace announced in the little boys school. He finds out that if he wins third prize he can get a new pair of sneakers. The tension mounts.

Miracle of the Seed, The [VHS]