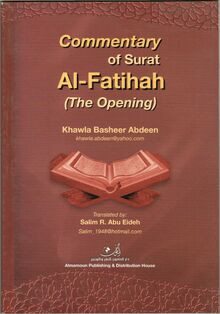 Al Fatihah is first Surah in the order of the Book of Quran, It consists of seven verses, It’s read by every devout Muslim in his five daily prayers, which means he regularly reads it at least 17 times a day. The primary meaning of "Al-Fatihah" is opening, which refers to that Al-Fatihah is the most important Surah, and thus was given the title "Umm Al-Kitab" which means mother of the Quran. In the light of this,This book came to explain everything in virtues of Surat Al-Fatihah through the following topics: "The merit of Al-Fatihah .. The Opening, seeking refuge with Allah, commentary of the Surah, the conclusion, amen"