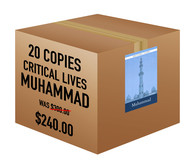 Muhammad was a religious visionary and political leader. Raised in the harsh Arabian Peninsula and orphaned while still a child, this unlikely leader and military genius received a calling to transform his society from a collection of raiding tribes into one of the worlds most progressive societies. His message of monotheism and righteousness motivated an entire people to abandon idolatry and spread the word of God to surrounding nations. Although he was a military genius, his greatest accomplishments came from the religion he preached: Islam, which called its adherents to lead a life of prayer, charity, and contemplation. The second largest religion in the world, both Islams prophet and its values are today often misunderstood by adherents and outsiders alike. This concise, informative biography explores: Muhammads background and boyhood, as well as the culture and society in which he lived A look at Muhammad as a family man, and how his personal life was a testament to his high regard for women Muhammads mission as a prophet and his new religions philosophy on topics ranging from monotheism to interfaith relations The Quran and how it was revealed, how Muslims view it in their religious life, and the concept of Jihad from Muhammads perspective Introduction Part One: Muhammads Early Life and Roots 1. Arabia Before Islam 2. The Child of Tragedy 3. Muhammad: Merchant of Mecca Part Two: The Coming of Prophethood 4. From Citizen to Prophet 5. The Unwelcome Prophet 6. Finding a Home for Islam 7. From Mecca to Medina 8. The Challenge of Ascendancy Part Three: The Struggle for Survival 9. The Great Battle of Badr 10. The Battle of Uhud 11. The Great Siege of Medina 12. Going Home: The Conquest of Mecca Part Four: Tomorrow the World 13. Arabias Last Stand 14. Looking Northward 15. The Passing of a Prophet Appendixes A: Muhammad in Western Literature B: An Outline of the Major Events of Muhammads Life C: Islams First Twenty Years D: Resources and References E: The Lineage of Muhammad