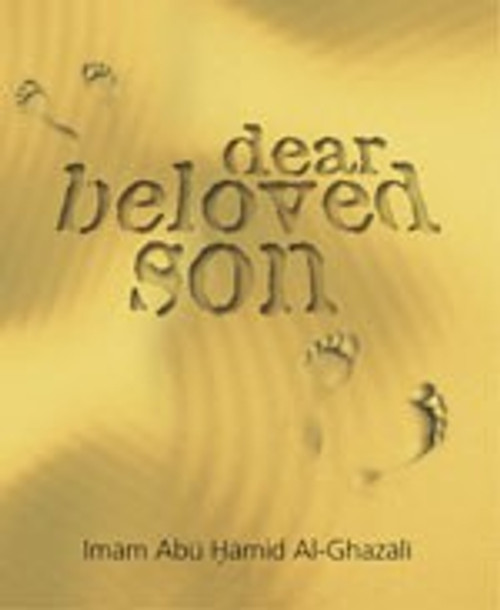 Dear Beloved Son Imam Abu Hamid al-Ghazali Product Overview... This book by Imam Abu Hamid al-Ghazali offers twenty four pieces of valuable advice to seekers of knowledge. It touches on all aspects of life, from material wealth and the love of this life, to Islamic etiquette and acquiring knowledge. Imam al-Ghazali illustrates his ideas throughout with relevant quotations from the Quran and Hadith, as well as poetry and logical examples and clear analogies which demonstrates the need to cleanse ourselves of bad manners so that we can develop good characteristics. This is certainly a powerful reminder of the importance of constantly identifying ourselves with the next life. This book is available in a paperback format with both Arabic and English text. An Extract from the Book... Counsel Knowledge To counsel others is as easy matter, the difficulty is accepting advice since it is bitter for those who follow their own inclinations and desires. They love the forbidden from the depth of their hearts. This is more applicable to seekers of knowledge and students of learning, those of them who are busy in the grace of spirits and the benefits of this world. They believe that mere abstract knowledge, without proper action, will rescue them. This is the belief of the philosophers. Praise and Glory be to Allah, The greatest of all. They do not know this much, that when they acquire knowledge, if they do not work according to it, the indictment against them is certain. The Messenger of Allah said: The person most severely punished of the Day of Judgment is the learned one who did not follow Allahs guidance and did not benefit from his knowledge. It has been narrated that someone saw al-Junayd after his death in a dream. Al-Junayd was asked: What news do you have Abal Qasim? he replied: Perished are the speeches and vanished are the allusions, nothing benefited us except the prostrations which we made in the middle of the night. About the Author... Imam al-Ghazali was born in 450 AH (1059 CE) in Tous. Shaykh Ahmed al-Razakani, a famous sufi scholar took care of him and educated him in fiqh and usul al-fiqh (principles of Islamic Jurisprudence). During this period of his youth, Imam Ghazali had the opportunity to travel extensively. On one of his trips back to Tous, some thieves stole his books and manuscripts. From that day he began to memorize everything he wrote. He lived in Nishapur and taught in the famous Nizamiyyah University in Baghdad (484 AH/ 1091 CE). He also lived in the Umayyad mosque and to this day there is a minaret named after him (Al-Ghazali minaret). He is the author of numerous books most notably the Ihya Ulum al-Din (a book on sufism and manners). He died in the year 505 AH (1111 AD). He was fifty-five years old when he passed away and left behind a very valuable heritage and rich thought

Faith in Allah, The Beloved Son

The Love of the Beloved

Muhammad the Beloved of Allah