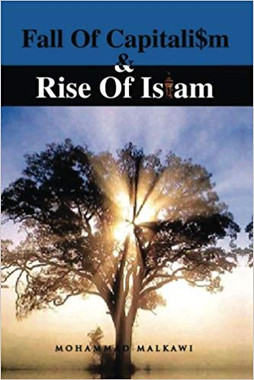 Fall of Capitalism & Rise of Islam

“The Fall of Capitalism and the Rise of Islam” provides a critical analysis of the current financial crisis in the US and the world at large. The collapse of financial institutions, the crash of the housing market, the evaporation of trillions of dollars, the creation of virtual unreal wealth, and the decline of productivity are symptoms of the potential failure of the ideology of capitalism. This failure has serious impact on the life quality of billions of people around the world. This book predicts a potential crash and collapse of the world order under the pressure of a failing capitalism. The book makes an account of another global phenomenon, namely the second rise of Islam. The rise of Islam, similar to the fi rst one which lasted for thirteen hundred years, is a comprehensive rise which brings up the economic system together with the political system, and the moral system together with the legal system. It is being sought to introduce to the world a system full of justice, fairness, and geared toward productivity and human righteousness. The rise of Islam is argued to be in the best interest of the human societies around the world, and that the propagated fear of this rise is unfounded. The book provides a description of the economic system and the political economy of Islam. The Islamic political economy integrates several mechanisms for natural distribution of wealth, while it maintains a high level of productivity through the inhibition of usury, hoarding, and exploitation. “The Fall of Capitalism and the Rise of Islam” makes extensive references to a score of historians, scholars, and scientists who provide a fair testimony of the Islamic civilization and the ideology of Islam.