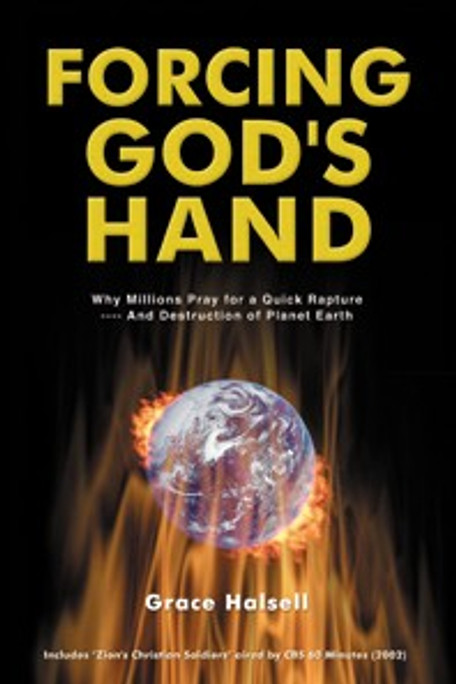 FORCING GODS HAND: Why Millions Pray for a Quick Rapture and Destruction of Planet Earth By Grace Halsell The book explores the danger posed by Christian fundamentalism - a doctrine that is sweeping America. Leaders of the doctrine proclaim that God wants - even demands - that Planet Earth be destroyed in our generation. Adherents to this doctrine are said to constitute the fastest growing movement in Christianity today. Fundamentalist Evangelicals believe there will be catastrophic events on earth, some occurring already, including the turmoil in the Middle East, culminating in the Battle of Armageddon in which Christ will triumph and begin ruling the earth. At this point, they believe, non-believers will be destroyed, good Christians saved and any remaining Jews converted to Christianity. By praying for their Rapture and the End of Time, might they Force the Hand of God -- to bring it about? The book also includes CBS 60 Minutes program, Zions Christian Soldiers and an interview with Jerry Falwell. Grace Halsell (1923-2000) served President Lyndon Johnson as his speech writer for three years. She covered both Korea and Vietnam as a journalist and wrote for newspapers in the U.S., South America, Europe, Russia, China, Japan and the Middle East. She wrote fourteen books among them the well-received Soul Sister, Prophecy and Politics: Militant Evangelists on the Road to Nuclear War, Journey to Jerusalem and The Illegals.

For God And Country

God Arises ( Evidence of God in Nature and in Science )

God Arises....Evidence of God in Nature and in Science

Commentary on the Forty Hadith of Al-Nawawi (2 Vols)

Forgiveness and Other Matters [PB]

Forty Hadith on the Importance of Knowledge, Learning and Teaching