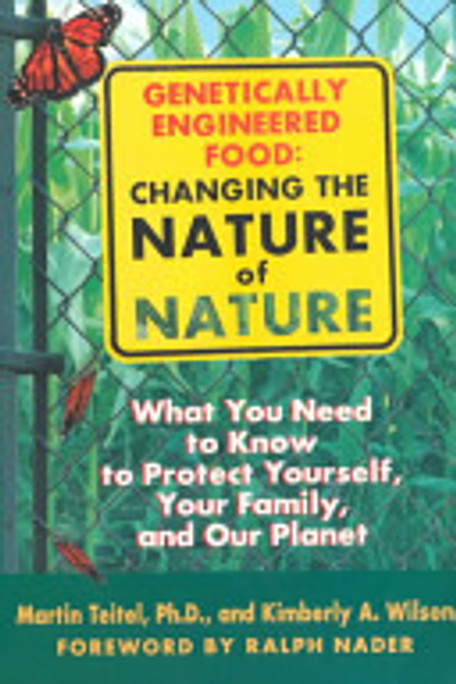 • The book that takes a comprehensive look at the threat to our food supply from genetic engineering.

• Includes new studies about the dangers of genetically engineered food.

• Refutes the "feed the poor" propaganda spread by agribusinesses.

• Is both an expose and educational primer on this controversial technology that is already a part of every American's diet.

• Explains the dangers of these foods to ourselves and our environment in easily understood terms.

Picture a world?
• Where the french fries you eat are registered as a pesticide, not a food.
• Where vegetarians unwittingly consume fish genes in their tomatoes.
• Where corn plants kill monarch butterflies.
• Where soy plants thrive on doses of herbicide that kill every other plant in sight.
• Where multinational corporations own the life forms that farmers grow and legally control the farmers' actions.

That world exists
These things are all happening, and they are happening to you.
Genetically engineered foods--plants whose genetic structures are altered by scientists in ways that could never occur in nature--are already present in many of the products you buy in supermarkets, unlabeled, unwanted, and largely untested. The threat of these organisms to human and environmental health has caused them to be virtually banned in Europe, yet the U.S. government, working hand-in-hand with a few biotech corporations, has actively encouraged their use while discouraging labeling that might alert consumers to what they are eating. The authors show what the future holds and give you the information you need to preserve the independence and integrity of our food supply.

What can you do?
First, inform yourself.
Genetically Engineered Food: Changing the Nature of Nature is the first book to take a comprehensive look at the many ramifications of this disturbing trend.

Authors Martin Teitel and Kimberly Wilson explain what genetic engineering is and how it works, then explore the health risks involved with eating organisms never before seen in nature. They address the ecological catastrophe that could result from these modified plants crossing with wild species and escaping human control altogether, as well as the economic devastation that may befall small farmers who find themselves at the mercy of mega-corporations for their livelihood. Taking the discussion a step further, they consider the ethical and spiritual implications of this radical change in our relationship to the natural world, showing what the future holds and giving you the information you need to act on your own or to join others in preserving the independence and integrity of our food supply

Reminders for People of Understanding

A guide for the Young Muslim

Quran teaching made simple for women