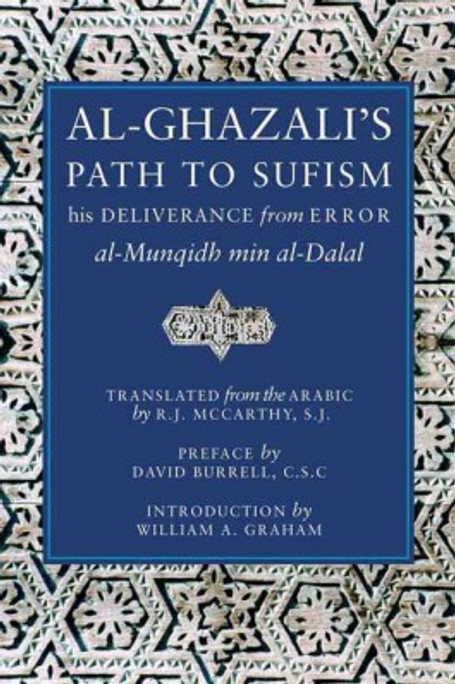 his DELIVERANCE from ERROR

Translated by R.J.McCarthy - Preface by David Burrell - Introduction by William A. Graham

This text has long been recognized as not only an Islamic "classic," but also as one of the great "spiritual autobiographies" of the worlds greatest religious thinkers. It is also the narrative of how one dedicated "seeker" after true knowledge and salvation, having probed various systems of thought and differing paths of learning and enlightenment, discovered the peace of the inner life and discipline of mystical spirituality--in Ghazalis case, the spirituality of the Sufis.

--William A. Graham, Professor of the History of Religion and Islamic Studies, Harvard University

This is by far the most scholarly, thoughtful and sympathetic translation of al-Ghazalis classic autobiography.

Imam Abu Hamid al-Ghazali (1058-1111) is generally acclaimed as the most influential thinker of medieval Islam. The present volume contains a translation of Ghazalis autobiography, The Deliverance from Error, one of the most remarkable personal documents to have come down to us from Islamic civilization. The Imam describes his education and his intellectual crisis which left him so paralyzed by doubt that he was forced to resign the most distinguished academic appointment of his day. His faith returned after years of wandering and seeking during which he achieved direct knowledge of God in the form of the illuminative experience of the Sufis.

Imam Al-Ghazali: The Book of Knowledge for Children Workbook

German Translation of the Meaning of the Holy Quran