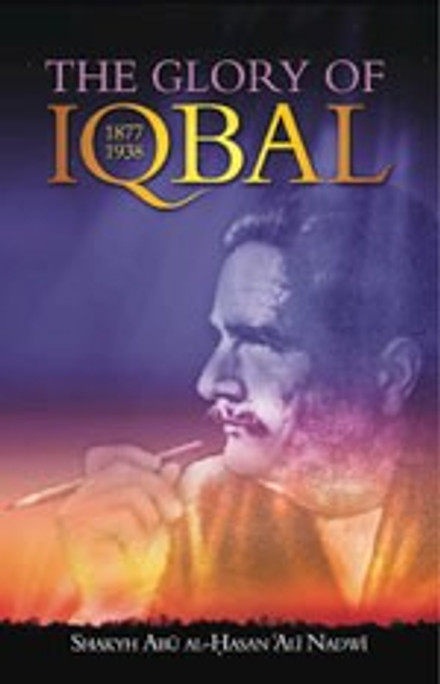 The Glory of Iqbal Shaykh Abu al-Hasan Ali Nadwi Product Overview... Iqbals poems established him as a celebrated poet on the literary horizon of the subcontinent. His brilliance later dazzled the eyes of people living in distant countries and won for him an honourable place amongst the immortal poets of the world. It was after his return from Europe that he started his real poetic career. His transitory period was over. His ideas had matured and he had formulated his outlook on human aspects, which lasted, throughout his life. Asraari-Khudi (Secrets of Self) and Rumuzi-Bekhudi (Mysteries of Selflessness) thrilled the literary circles of the East and the West. These poems deliver the message he has for mankind and deal with the development of the individual self and the problems an individual faces as a member of society. This book describes the life of Allama Iqbal who was, undoubtedly, one of the greatest Islamic thinkers of all times. He was, in fact, a poet of great genius, philosopher and law. An Extract from the Book... The Mosque of Cordoba In 1932, Iqbal visited Spain and also went to see the Mosque of Cordoba. It was not an ordinary sightseeing trip by a tourist interested in ancient monuments but a pilgrimage to an outstanding symbol of faith by a faithful Believer and a warm-hearted poet. It was a pilgrimage of love and loyalty by a celebrated Muslim to pay homage to the spiritual legacy of Abdul Rahman el-Dakhil and his companions. Iqbal was greatly moved by the magnificence and solemnity of the Mosque and the deep emotional responses its awe-inspiring sight evoked in him found expression in the immortal poem called Masjid-i-Qartaba (The Mosque of Cordoba). Iqbal saw it as a cultural landmark of Islam and in its architecture and engravings he saw a moving portrait of the Believers moral excellence and aesthetic refinement as well his high-mindedness, sincerity, piety and devotion. The Mosque reminded Iqbal of its builders and their keen appreciation of artistic beauty, and of the noble ideas and appreciation, call and message, they upheld in life and propagated in the world. Its tall, stately minarets revived the memory of the spellbinding Azan that once used to rise from them and which people heard every day at the beginning and the end of the stresses of life. The Azan is a symbol of the unity and solidarity of the Muslim Millet. The call it gives and the message it conveys may, indeed, be described as the National Anthem of Muslims and it is unique to their community. At one time the soul of the universe trembled and the foundations of the citadels of falsehood shook at the sound of it. It was the Islamic Azan that announced the dawn of a new morning and dispelled the gloom that had enveloped the world in the 6th Century A.D. Iqbal recalls the Divine message and the celestial guidance the Azans used to carry to the four corners of the world and the depth and intensity of their significance. The more he ponders over it the more is he convinced that the Millet which is endowed with this eternal call and lives according to this everlasting message is, also, imperishable. About the Author... Shaykh Abul Hasan Ali Nadwi was born in India in 1941. He belonged to the illustrious family of Syed Ahmed Shahid. Shaykh Nadwi excelled in the studies of tafsir, hadith and fiqh. He mastered the Arabic language and literature to such an extent that most of his books would be written in Arabic. He was the Rector of Darul Ulum Nadawatul Ulama and President of the Academy of Islamic Research and Publications. He was a founding member of the Muslim World League and a visiting Professor at the Universities of Damascus and Madinah respectively. He was the founding member of the Oxford Centre for Islamic Studies and in 1980 he was awarded the King Faisal Award for his services to Islam. He passed away in 1999.

Goodnight Stories from the Quran [HB]

Gifts for the Seeker