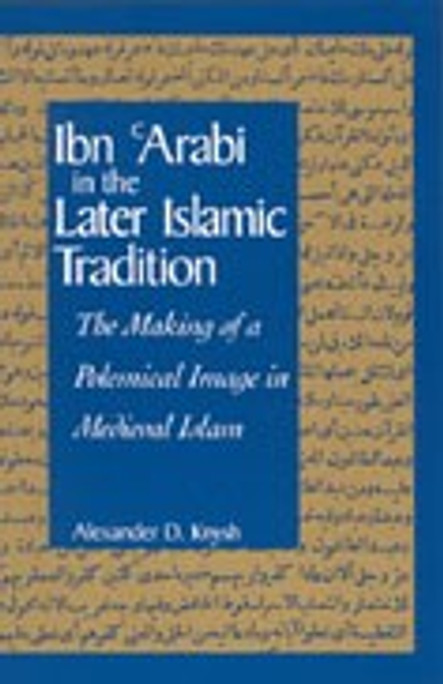 Ibn Arabi in the Later Islamic Tradition The Making of a Polemical Image in Medieval Islam Alexander D. Knysh - Author $29.95 Paperback - 449 pages Release Date: December 1998 Summary Examines the fierce controversy over the legacy of Ibn Arabi, the great Islamic mystic. Knysh has looked at exactly who were the supporters and opponents of Ibn Arabi for several centuries after his death, where they were getting their information, why they should have taken the position they took, and so forth. The author brings together a lot of tidbits in the secondary literature that people have not connected, and he does so with careful attention to the primary texts. -- William C. Chittick, author of The Self Disclosure of God: Principles of Ibn Arabis Cosmology This book examines the fierce theological controversy over the great Muslim mystical thinker Ibn Arabi (1165-1242). Even during his lifetime, Ibn Arabis conformity with the letter of the Muslim dogma was called into doubt by many scholars who were suspicious of the monistic (unitive) tendencies of his metaphysical teaching, of his claims to be the Prophets successor and restorer of the true meaning of the Islamic revelation, and of his allegorical interpretation of the Quran. Following Ibn Arabis death, these misgivings grew into an outright condemnation of his teachings by a number of influential thirteenth through fifteenth century theologians who portrayed him as a dangerous heretic bent on undermining the foundations of Islamic faith and communal life. In response to these grave accusations, Ibn Arabis advocates praised him as the greatest saint of Islam who was unjustly slandered by the bigoted and narrow-minded critics. As time went on, these conflicting images of the mystical thinker became rallying points for various political and scholarly factions vying for lucrative religious and administrative posts and ideological denomination. In thoroughly analyzing the heated debates around Ibn Arabis ideas throughout the three centuries following his death, this study brings out discursive strategies and arguments employed by the polemicists, the hidden agendas they pursued, and the reasons for the striking longevity of the issue in Islamic literature up to the present day. On the theoretical level, this book reassesses the validity of such common dichotomies as orthodoxy versus heresy, mainstream versus mystical interpretations of Islam, and communalism versus individualism as well as other issues related to the history of Islamic thought. Alexander D. Knysh is The Sharjah Professor of Islamic Studies, Department of Arabic and Middle East Studies, University of Exeter, United Kingdom. Table Of Contents IBN ARABI IN THE LATER ISLAMIC TRADITION The Making of a Polemical Image in Medieval Islam Alexander D. Knysh Contents List of Tables Preface Abbreviations A Note on Transliteration and Dates Introduction 1. Defining The Approach Ibn Arabi in Recent Western Scholarship 2. The Biographical Prelude Ibn Arabis Biography: From Early Accounts to Later Interpretations Ibn Arabi in the Biographical Works of Western Muslims The Account of Ibn al-Musdi The Anecdotal Evidence From al-Qazwini A Sufi Perspective: Ibn Abi l-Mansur Al-Qastallanis Polemical Twist Conclusion 3. Between Damascus And Cairo: The Affair Of Ibn Abd Al-Salam The Historical Setting Sufism and Sunni Islam: Concord or Expediency? Religion and Politics in the Mamluk State Defending the Purity of Islam in the Mamluk State Ibn Arabis Opponents in Search of Precedents Enter Ibn Abd al-Salam al-Sulami Ibn Abd al-Salam and Sufism Ibn Abd al-Salams Denunciation of Ibn Arabi: An Essay on Contextualization Ibn Abd al-Salam on the Hierarchy of the Sufi Gnostics Sufi Responses to Ibn Abd al-Salams Censure Ibn Abd al-Salam on the Relationship Between the shari â€™a and the haqiqa Some Later Elaborations Conclusion 4. Ibn Taymiyyas Formidable Challenge Structure, Method, and Contents of Ibn Taymiyyas Antimonistic Writings Ibn Taymiyyas Personal View of the Greatest Master Argumentum ad hominem An Argument from Metaphysics Ibn Taymiyya on the Doctrine of Sainthood Ibn Taymiyyas Antimonistic Critique sub specie aeternitatis 5. Ibn Arabi In The Biographical Literature From The 8th/14th-9th/15th Centuries Shaping an Ambiguous Image: al-Dhahabi Apologetic Uses of al-Dhahabis Ambivalence: al-Safadi and al-Yafii Al-Fasi: Between Biography and Polemic Ibn Arabi Through the Eyes of an Admirer: al-Qari al-Baghdadis â€˜Al-Durr al-thamin Conclusion 6. The Metaphysical Argument Revisited: Al-Taftazani Historical and Intellectual Background Al-Taftazanis Refutation of Ibn Arabi The Metaphysical Argument The Problem of Pharaohs Faith Conclusion 7. Ibn Arabi In The Muslim West: A Prophet in His Own Land? Ibn Arabi in Western Islamic Historiography Ibn Arabi Through the Eyes of Ibn al-Khatima Ibn al-Khatib The Vizier Ibn al-Khatib on Love Mysticism Ibn Arabi in Rawdat al-taâ€™rif Ibn Khaldun and Islamic Mysticism Ibn Khaldun on Monistic Philosophy Ibn Khaldun and the People of tajalli Conclusion 8. Egypt: The Polemic Continues Ibn Arabi in Mamluk Cairo Al-Bukhari versus al-Bisati: A Public Dispute over Ibn Arabis Unbelief Al-Biqais Destruction of Monistic Philosophy Conclusion 9. Ibn Arabi in Yemen Yemeni Society in the Later Middle Period Conclusion 9. Ibn Arabi in Yemen Yemeni Society in the Later Middle Period Sufism in Medieval Yemen The Rasulid Kingdom The Rasulids and Islamic Learning Ibn al-Ahdal on the Rise of Monistic Sufism in Yemen Al-Jabarti and the Sufi Community of Zabid Al-Jabartis Associates: Ibn al-Raddad and al-Jili Scholarly Disputes over Ibn Arabi: The fuqaha â€™ versus the sufiyya ? Ibn al-Muqri versus al-Kirmani: Final Episodes of the Long Struggle Conclusion General Conclusion Notes Bibliography General Index Index of Terms Index of Book Titles

I Wonder About Allah (Book Two)