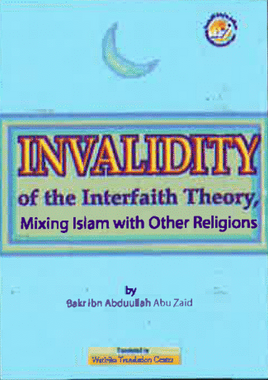 Invalidity of the Interfaith Theory: Mixing Islam with Other Religions

The calamity of advocating a mixture of the religion of Islam and other obsolete religions, such as Judaism and Christianity- which is promoted at successive conferences sponsored by infidel nations under names like "Getting Religions Closer to Each Other," "Religion Unity," "Brotherhood of Religions," "Dialogue between Cultures"- is one of the most abominable reinforcements of the New World Order, which aim to diffuse disbelief and atheism, spread licentiousness, obliterate the distinctive features of Islam, and change man's nature.

That is why this book has been devoted to the task of exposing the dangers with which Muslims are threatened by that calamity, proving its invalidity, and warning Muslims against it.