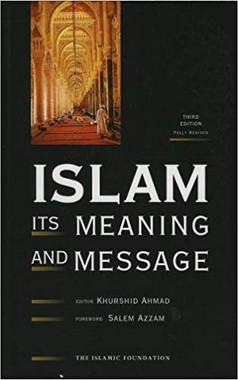 Islam: Its Meaning and Message

Imagine if someone put together into one volume, essays by a variety of well-known Muslims discussing the very basic tenets of Islam. The result would naturally be a very perceptive introduction to Islam. But what if these "well-known Muslims" were scholars of such repute as Muhammad Asad, Syed Qutb, Mawdudi, Syed Hossein Nasr, Abdul Hameed Siddiqui, Jamal Badawi, T.B. Irving, and so on. Sound too good to be true? This work, a collection of fourteen articles on the Islamic outlook on life, the Qur'an and Sunnah, the Islamic system, and Islam in the modern world, does indeed do just the above, taking writings of leading intellectuals and synthesizing them, under the pen of the equally learned editor, into a whole, designed to give the Western reader a look at Islam, the way Muslims see it.