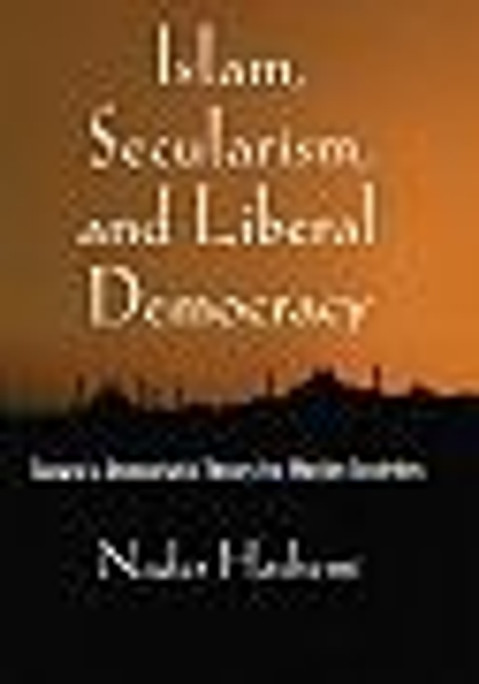 Islams relationship to liberal-democratic politics has emerged as one of the most pressing and contentious issues in international affairs. Nader Hashemi challenges the widely held belief among social scientists that religious politics and liberal-democratic development are structurally incompatible. While there are certainly tensions between religion and democracy, the two are not irreconcilable.

Liberal democracy requires a form of secularism to sustain itself, yet the main, political, cultural and intellectual resources that Muslim democrats can draw upon are religious. How can this paradox be reconciled? Hashemi makes three principal arguments. First, in societies where religion is a key marker of identity, the road to liberal democracy must pass through the gates of religious politics. The process of democratization, therefore, cannot be artificially de-linked from debates about the normative role of religion in government. Secondly, while liberal democracy requires secularism, religious traditions are not born with an inherent secular and democratic conception of politics. These ideas must be developed, and in an emerging democracy, how they are developed is critical. Finally, Hashemi argues that there is an intimate relationship between religious reformation and political development. While the first often precedes the second, these processes are deeply interlinked. Democratization does not require a privatization of religion, but it does require a reinterpretation of religious ideas that are conducive to liberal democracy. By engaging in this reinterpretation, religious groups can play a central role in the development and consolidation of democracy..

Islam, Secularism, and Liberal Democracy argues for a rethinking of democratic theory so that it incorporates the variable of religion in the development of liberal democracy. In the process, it proves that an indigenous theory of Muslim secularism is not only possible, but is a necessary requirement for the advancement of liberal democracy in Muslim societies. .

"Commentators like Bernard Lewis and Samuel Huntington have argued that there is something inherently hostile to democracy in Islam. In his serious and deeply researched book, Nader Hashemi draws both on historical political thought and modern comparative social science to show that such arguments are both ahistorical and oblivious to the ways in which secularism is actually socially constructed and earned in Western societies. With examples from Turkey, Indonesia and elsewhere, he demonstrates that Islam can accommodate democracy with no greater (or lesser) difficulty than Christianity has done. This is an important book that challenges too narrowly Western conceptions of democracy and too historically opaque views of Islam, thereby helping to heal the unnecessary schism that has too often defined the relationship between Islam and democracy." --Benjamin R. Barber, author of Jihad vs. McWorld .

"This probing study shows how empty are the essentialist cliches that cast Islam as an obstacle to democracy. It offers a rich reflection on the proper definition of secularism for our time; and an insightful discussion of Islamic responses to secularism, both negative and positive. This book is a contribution to the global debate. It should be read from Vancouver to Vladivostock, from Djakarta to Rabat."--Charles Taylor, Professor Emeritus of Philosophy, McGill University and author of A Secular Age .

"A thoughtful and erudite examination by a young scholar of some of the most difficult questions of our times: how to reconcile the project of liberal democracy with a non-secular but tolerant and open Islam? Is this conceivable? Deploying political theory and comparative politics, Hashemi sensitively argues that this is possible, indeed even, necessary."--Seyla Benhabib, Eugene Meyer Professor of Political Science and Philosophy, Yale University and author of ^iThe Claims of Culture .

"This book is by far the most insightful and authoritatively learned study I have read on modernity, Islam and the twin challenges of secularism and liberal democracy. In this well-written, accessible and tightly reasoned book, Hashemi succeeds in overturning conceptual frameworks and models that, although superficial and misleading, have far too long tended to dominate mainstream scholarly discourses in the field. In this profound and inspired, and very often inspirational work, Hashemi has succeeded in raising the bar and in setting a new standard of critical analysis in the field, and for this reason alone, this will prove to be a controversial book. In all cases, this masterful contribution is destined to receive a very wide readership."--Khaled Abou El Fadl, Alfi Professor of Law, UCLA School of Law .

"Nader Hashemis excellent book reminds us that there are many ways in which religiosity has profoundly shaped our languages and institutions of democracy. Bubbling with smart questions, pointed remarks and fresh ways of thinking, it presents a compelling case for taking seriously the elective affinities between religion and democracy."--John Keane, Professor of Politics, University of Westminster (London) .

The Headscarf Controversy Secularism and Freedom of Religion