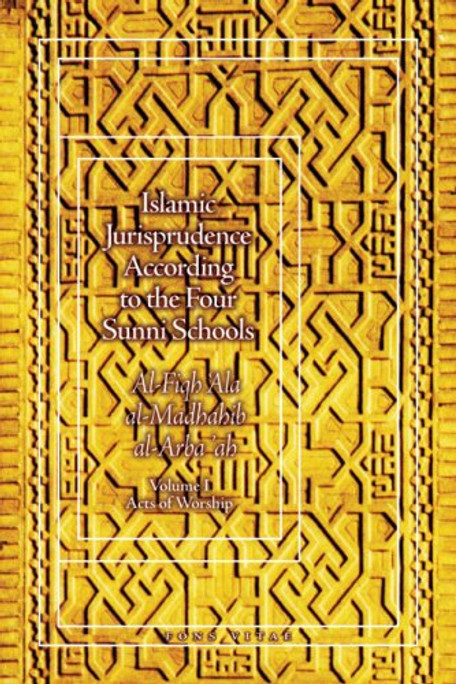 Islamic Jurisprudence According to the Four Sunni Schools is a translation of Volume I of al-Fiqh ‘ala al-Madhahib al-Arba 'ah, by the Azhari scholar Sheikh ‘Abd al-Rahman al-Jaziri (1882-1941). Dealing with the forms of worship (ibadat), this work offers an in-depth discussion of ritual purity (taharah), ritual prayers (salat), including funeral prayers and the practice of visiting the tomb of the Prophet Muhammad, fasting (siyam), spiritual retreats (i ‘tikaf), charity (zakat), the pilgrimage to Mecca (both al-hajj and al ‘umrah), and the offering of animal sacrifices.

Unlike previous works on Islamic law, which offer a medieval perspective, Islamic Jurisprudence According to the Four Sunni Schools is unique in providing the four legal views of ibadat or acts of worship, according to the interpretations of more recent traditionalists trained at al-Azhar University. It is a valuable and detailed reference work for those interested in Islam, Islamic law or comparative law and contains a glossary of Islamic terminology. This is a must for academic libraries as well as for individuals who want to learn more about the performance of religious duties.

To date this is the only book on the market which brings together the teachings of all four Sunni schools of jurisprudence on a single topic. As such, it provides a unique service by enabling students of Islam, both Muslim and non-Muslim alike, to compare the teachings of the various schools without having to go in search of the relevant source material for each school. It demonstrates the breadth and mercy of interpretation of each law and provides the Muslim practitioner with various ways in which he or she may fulfill the tenets of the faith.

"This is one of the most clear and precise books of contemporary Islamic jurisprudence. It teaches all of the aspects and categories of Islamic jurisprudence according to the four Sunni schools that are followed by the majority of Muslims: The Hanafi, the Maliki, the Shafi'i and the Hanbali.

The Mukhtasar Al-Quduri: A Manual of Islamic Law According to the Hanafi School

Islamic Medicine the Key to a Better Life