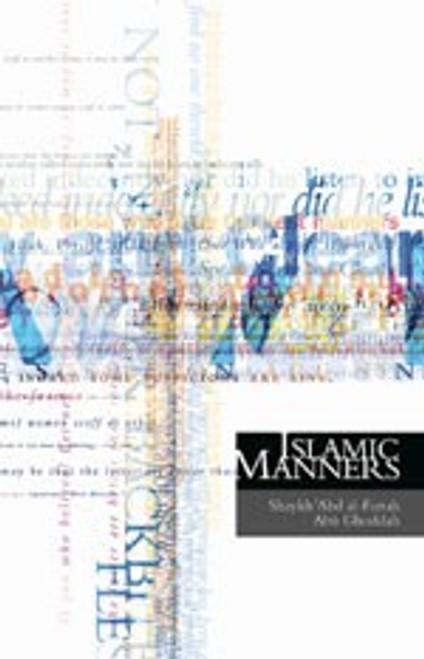 Islamic Manners Shaykh Abdul Fattah Abu Ghuddah Product Overview... Written by one of the most outstanding scholars of the 20th century, Islamic Manners is a vital book that exemplifies the sublime Islamic Personality. Shaykh Abd al-Fattah Abu Ghuddah (1917 - 1997) was a leading scholar in the field of hadith and strove not only in narrating prophetic traditions but also making it a living reality. This book discusses essential adab (manners) and covers the following areas: the scope of Islamic manners, importance of appearance, entering and leaving a house, the manners of visiting, the manners of conversation, social manners, communicating with non-Muslims, the manners of eating, weddings, visiting the sick and condolences. An extract from the book Stay In Touch If you can not visit your relatives, friends or acquaintance, you can still keep in touch by calling them or sending them a letter. This will leave them with a deep amicable impression, and will keep the relationship alive. Al-Fadl Ibn Marwan, the vizier of the Abbasid Khalifah al-Mutasim, said, enquiring about friends is like meeting them. In this regard, I would like to quote two poems:If dear friends missed meeting each other Then, the best meeting is a letter I will be grateful everyday To a friend sending greetings while far away... Brief Advice to My Sisters I would like to give special advice to my dear Muslim sisters. If you want to visit your relatives or your Muslim sisters, carefully select the day and the hour of your visit and its duration. There are appropriate and inappropriate times for paying visits even to relatives and friends. Do your best to make the visit a nice, brief, and pleasant one. Avoid turning it into a boring, wearisome, inquisitive and lengthy visit. Instead, it should be a visit whose purpose is to rekindle and nourish an old friendship or kinship. The visit is desirable if it is short and considerate, and it is undesirable if it is long and tedious during which conversation moves from being purposeful and valuable to being aimless and trivial. The honorable Tabii Muhammad ibn Shihab al-Zuhri said, When a meeting becomes too long, Satan increasingly partipates in it. During the visit, make sure that most if not all of your talk is of value and benefit. Keep away from backbiting, gossips and idle talk. Astute Muslim women do not have time for such nonsense. About the Author... Shaykh Abd al-Fattah Abu Ghuddah was born in Syria in 1917. One of the outstanding Muslim scholars of the 20th century, he was a leading scholar in the field of Hadith and the Hanafi school of Fiqh. He studied in Syria and Egypt specializing in Arabic Language, Hadith, Shariâ€™ah and Psychology. He had many prominent teachers, amongst them Shaykh Ragib al-Tabbakh, Shaykh Ahmed ibn Muhamad al-Zaraqa, Shaykh Isa al-Bayanuni, Shaykh Ahmad al-Kurdi and the renounced Ottoman Scholar Imam al-Kawthari. He met Imam Hasan al-Banna in the 1940s and joined the Muslim Brotherhood. On his return to Syria he became very active in his daâ€™wah work and eventually he became the leader of the Muslim Brotherhood in Syria. He taught Usul al Fiqh, Hanafi Fiqh and Comparative Fiqh at the University of Damascus. He also taught at the King Saud University and Imam Muhammad ibn Saud Islamic University. He was buried in al-Baqi Cemetery in Madinah in 1997.

A Coloring Book of Islamic Manners