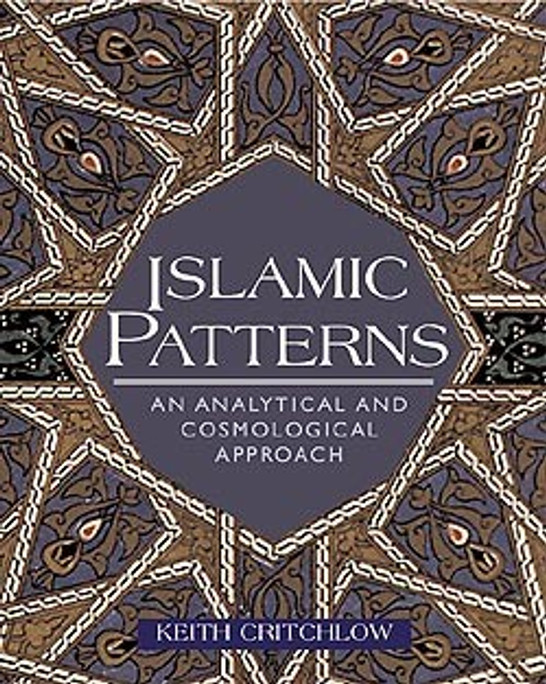 Islamic Patterns An Analytical and Cosmological Approach By (author) Keith Critchlow The classic study of the cosmological principles found in the patterns of Islamic art and how they relate to sacred geometry and the perennial philosophy. â€¢ 150 color and black-and-white drawings of Islamic patterns. â€¢ Explains how these patterns guide the mind from the mundane world of appearances to its underlying reality. For centuries the nature and meaning of Islamic art has been wrongly regarded in the West as mere decoration. In truth, because the portrayal of human and animal forms has always been discouraged on Islamic religious principles that forbid idolatry, the abstract art of Islam represents the sophisticated development of a nonnaturalistic tradition. Through this tradition, Islamic art has maintained its chief aim: the affirmation of unity as expressed in diversity. In this fascinating study the author explores the idea that unlike medieval Christian art, in which the polarization of such forms and patterns was relegated to a background against which to set sacred images, the geometrical patterns of Islamic art can reveal the intrinsic cosmological laws affecting all creation. Their primary function is to guide the mind from the mundane world of appearances toward its underlying reality. Numerous drawings connect the art of Islam to the Pythagorean science of mathematics, and through these images we can see how an Earth-centered view of the cosmos provides renewed significance to those number patterns produced by the orbits of the planets. The author shows the essential philosophical and practical basis of every art creation--whether a tile, carpet, or wall--and how this use of mathematical tessellations affirms the essential unity of all things. An invaluable study for all those interested in sacred art, Islamic Patterns is also a rich source of inspiration for artists and designers. About the Author(s) of Islamic Patterns Keith Critchlow is Director of Research and Director of Visual Islamic and Traditional Arts at the Prince of Wales Institute of Architecture. An internationally known lecturer on Islamic art, he is the author of Pythagorean Geometry. He lives in England. Praise for Islamic Patterns A masterly exposition of Islamic pattern and the underlying cosmological principles. Art Review

Islamic Philosophy from Its Origin to the Present

A Coloring Book of Islamic Manners

Islamic Concept and Its Characteristics