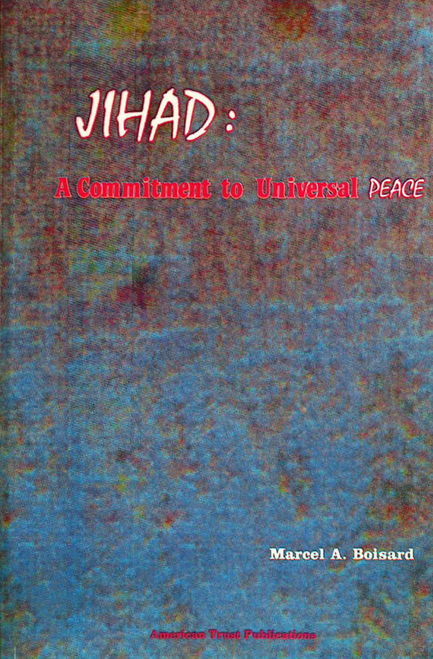 Jihad: A Commitment to Universal Peace by Marcel Boisard â€œIn Jihad, Boisard explains, in very precise terms, what jihad really is. He discusses the fallacies and the falsities that surround the Western understanding and depiction of jihad. The West continues to refuse to accept that principles based on religion can be brought into the â€˜philosophy of our industrial age.â€™ They ignore the fact that Islam is not hostility, but dynamism, and that â€˜adl, Ihsan, Musawatâ€”justice, compassion, equalityâ€”are the three pillars of healthy human relations for the true believer.â€ -Aminah Janan Assilmi In todayâ€™s complex, and often confusing, social reality, Islam has been at the forefront of political, social, and economic debate. Dr. Boisard cuts through the maligned portrayal of jihad that runs rampant in modern times, to dispel the myths of this widely-misunderstood concept of social and personal struggle for righteousness. This book provides a clear, concise, and accurate explanation of jihad, that derives from the fundamentals of the religion itself. Executive Director of the United Nations Institute for Training and Research (UNITAR) since 1992, Dr. Marcel Boisard has served in several leading positions at the United Nations for almost a quarter-century. He has also led several private sector research and teaching projects, as well as diplomatic and humanitarian programs for regional organizations, in Africa, Europe, and the Middle East. Dr. Boisard has authored over 40 books and articles covering international cross-cultural relations, the Arab and Muslim world, and intergovernmental organizations. Redesigned with a beautiful new cover, this book will prove enlightening for Muslims and non-Muslims that span all backgrounds.

Jihad: A Commitment to Universal Peace

The Status Of Women in Islam (USED)

The Basis of Muslim Belief (USED)