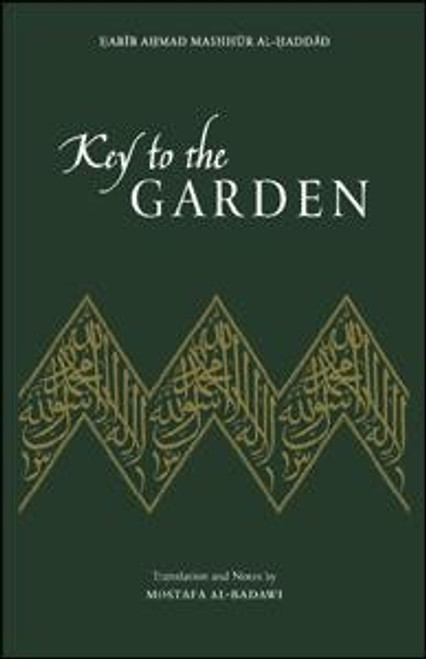 Key to the Garden Habib Ahmad Mashur al-Haddad NEW STARLATCH RELEASE: A completely revised second edition of a very popular volume. Key to the Garden is an elaborate exposition of the Prophet Muhammadâ€™s teaching that the inner life must pass through three stages: affirmation of faith with the tongue, then the mind, and finally the heart. The Muslim Testimony of Faith, that â€œthere is no deity save God,â€ is at once the essence and the highest principle of Islam. This book is a demonstration, by one of the greatest recipients of the Prophetâ€™s heritage of knowledge, of how the whole spectrum of Islamic thought and worship unfolds naturally from these few words. ABOUT THE AUTHOR: Habib Ahmad Mashhur al-Haddad Habib Ahmad Mashhur al-Haddad was widely acknowledged as among the leading scholars and spiritual masters of the twentieth century. He was born in a town in Hadramawt, in southern Arabia. At an early age he committed the Quran (the Muslim scripture) to memory and spent most of his time in the relentless pursuit of the various branches of religious knowledge. He dedicated his life to teaching and spreading the word of Islam. This present books is his most celebrated and is widely read. He died in Jeddah, Saudi Arabia, December 6, 1995, and was buried in cemetery near Makkah. ABOUT THE TRANSLATOR: Mostafa al-Badawi Mostafa al-Badawi is one of the worlds premier translators of Islamic spiritual texts. He is a Consultant Psychiatrist and member of the Royal College of Psychiatrists. He studied under many shaykhs, foremost among whom is the late Habib Ahmad Mashhur al-Haddad. His other translations include: Book of Assistance, The Lives of Man, Two Treatises, The Prophetic Invocations, and Degrees of the Soul. He is also the author of Man and the Universe: An Islamic Perspective, recently published by Wakeel Books. He resides in Madinah. Excerpt La ilaha illaâ€™llah: A phrase sublime in its meaning, brief in its construction, vast in its effect, noble in its rank, brilliant in its light, and unique in its merit. It comprises four words upon which the Faith is founded and the qibla set. This is the phrase that was given in every Book sent down by God to every one of His noble Messengers, and through which one is rescued from the infernal fires and wins eternal happiness in the Gardens. God the Exalted has said: Know that there is no god but God! (Quran, 47:19); I am God, there is no god but Me, so worship Me! (Quran, 20:14); God, there is no god but He, the Living, the Sustainer (Quran, 2:255); God, there is no god but He, to Him belong the Most Beautiful Names (Quran, 20:8); and We sent no Messenger before you without revealing to him: â€œThere is no God but Me, so worship Meâ€ (Quran, 21:25). ......... God alone, and none other, is the true Deity, the Necessary Existent, who is Creator, Producer, Fashioner, Provider, Giver of life and death, and Wise Disposer; who has perfected everything He has created, and excelled in everything which He has made; who directs all things with ultimate precision, and has determined everything He has decreed. He alone is the true God, Pre-existent and Eternal, worthy of inward and external worship, exalted above all blemish, who possesses the most exalted attributes and the most beautiful names. His are might and majesty; none shares in His essence, attributes or actions. There is no other God than He. ...... Sound knowledge and conclusive proofs have established that everything in the universe, whether it be high or low, articulate or mute, is interconnected. The universe is constructed of harmoniously interrelated and interacting forces. If a single atom should deviate a hairâ€™s breadth from its designated course, for which it was created, the order of the world would be upset, its precise interconnectedness disrupted, and the heavens would collapse upon the earth. The worlds have been and shall remain joined and bound in mutual attraction, performing the functions they were created for, in the most perfect, ordered, and precise wayâ€”until the appointed time. Who then is the creator of all this? Who has originated these tremendous forces? Who moves the planets in the heavens, maintains their orbits and their regularity, and has governed them since the beginning of the world? Who holds the heavens back from collapsing upon the earth? Who moves ships in the seas, clouds in the air, and arranges the affairs of all beings upon the earth? Who sustains all that is in the heavens and earth, whether planets, shining stars, nations of different races, languages, and traits, and all other excellently fashioned and precisely disposed things, which have performed their functions down the ages with such exactitude? Is it not God, Lord of the Worlds, the Omniscient, the Able, the Disposer, the Wise, to whom belongs all Sovereignty, who has neither partner nor helper?

In the Prophets Garden

The Gardens of Saba

The Garden of Paradise

Key To The Garden Of Bliss (used)

Key To The Garden Of Bliss (used)