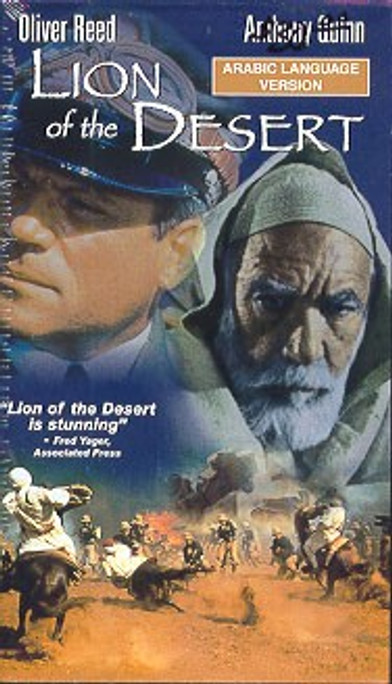 
Made in 1979,Â Lion of the DesertÂ is a historically faithful study of the guerrilla struggle against the Italian fascist occupation of Libya led over a 20 year period by Omar Mukhtar, played by Anthony Quinn. The Italians colonized Libya, Somalia, and Ethiopia as part of an attempt to compete with their Western European rivals who had a toehold in Africa. Mukhtar was a leader of the Senusi people who lived in the Cyrenaica region in Eastern Libya before it became a modern state. Described as a bedouin in the film, the Libyians have the same kind of fiercely independent streak as the Algerian Kabyle (Berbers) who challenged French colonization in the 1950s.
Historians estimate that between 30,000 and 70,000 Senusis were killed during the occupation. Shortly after, the fascists hung Omar Mukhtar. His followers issued a statement that could be a rallying cry for the Iraqi resistance today: The Fascists believed that the condemnation of Omar Mukhtar to death would make it easier for them to occupy the country, but unfortunately for them the souls of the martyrs are an eternal flame which inspires the national spirit in the hearts of the people still living. The martyr of the Tripoli-Brace nation is not dead; for he has left his people with an immortal monument of heroism which will be inherited by future generations.
Special Features Include:Â
Disc 1:
1. Lion of the Desert - English Language.
2. Widescreen Presentation (1.77:1) enhanced for 16x9 TVs
3. The Making of LION OF THE DESERT
4. Audio Commentary with Producer/Director Moustapha Akkad
Disc 2:
1. Omar Mukhtar - Arabic Language
2. Widescreen Presentation (1.77:1) enhanced for 16x9 TVs
3. The Making of OMAR MUKHTAR
4. Arabic Audio Commentary with Producer/Director Moustapha Akkad

The Days in the Desert (Colouring Book)

Nursed in the Desert