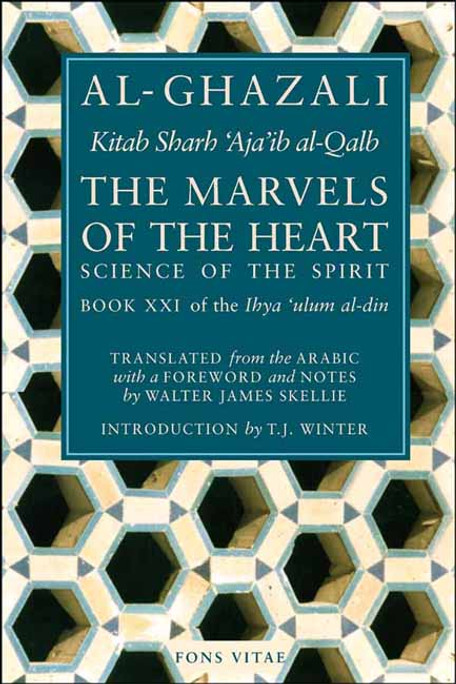 The Marvels of the Heart
Kitab Sharh Ajaib al-Qalb

SCIENCE OF THE SPIRIT

Translated from the Arabic by Walter James Skellie
This is a classic Sufi manual on the science of the heart. For Sufis, the heart is more than a piece of flesh, it is the seat of the soul, and holds the key to the intimate relationship which exists between soul and body.

Each heart, according to this traditional wisdom accumulated over centuries of spiritual practice and experience, possesses four qualities: predatory, animal, demonic, and divine. The latter represents our true origin and potential, and by use of the intelligence and spiritual practices enabled by Gods grace, we may restore equilibrium to our inner core. As the Koran says: By the remembrance of God do hearts find peace.

Ghazali uses a series of traditional Sufi teaching stories to illustrate the theme of the heart as a mirror. The light of the divine sun can only shine in the heart when the seeker recalls the Prophets teaching that everything has a polish, and the polish of hearts is the remembrance of God. Bad character traits, acquired through faulty upbringing, are like a smoke which clouds the hearts mirror; this is the hearts rust mentioned in the Koran. But the one who has polished his heart is made luminous by Gods light, and brings that light to others, which is the quality of sainthood.

Abu Hamid al-Ghazali (d.1111), a native of Central Asia, was the best-known jurist, theologian and mystic of medieval Islam. Himself a teacher of Sufi initiates, he recorded his practical teaching in his great work, the Ihya Ulum al-Din (Revival of the Sciences of Religion), from which the present work is taken.

The Intelligent Heart The Pure Heart

An Exposition Of The Hearts

Mary the Blessed Virgin of Islam

Marvellous Stories from the Life of Muhammad

Marriage and Family in Islam

Maryam and the Trees

Maruf and Maryam in Mecca for Hajj