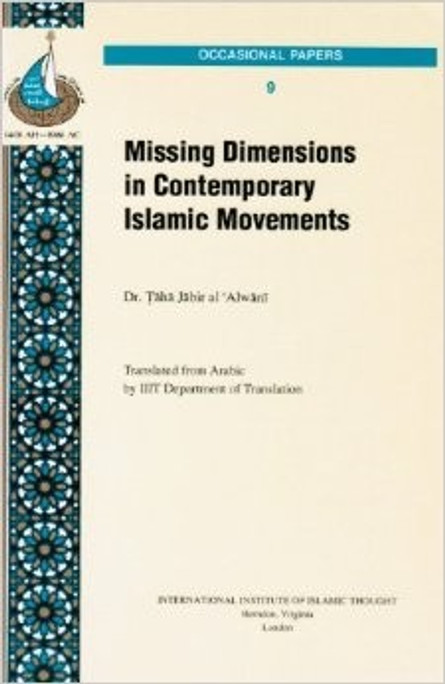 Eminent Iraqi scholar Dr. Taha Jabir al Alwani in his monograph Missing Dimensions In Contemporary Islamic Movements has highlighted some of the very fundamental weakness of the Islamic movements:

1.Â Â Â Â Â Â The Islamic movements have become tainted with a partisan mentality; they have allowed themselves to turn into groups at odds with the higher interest of Islam. Indeed they have become incapable of carrying out any form of collective work within the body politic. That is why they have become easy targets of others to isolate or destroy them.

3.Â Â Â Â Â Â This confusion of the divine and the human has resulted in some of these movements claiming that they are the sole possession of the Truth, thus conferring on their own human thought andÂ ijtihadÂ the sanctity of fundamental texts. By the same token, they have expropriated the historical achievements of the Muslim community as a whole and credited it to themselves through the claim that they are the only extension or embodiment of the historical reality.

4.Â Â Â Â Â Â Some Islamic movements have deluded themselves into believing that they could do without intellectual effort orÂ ijtihadÂ so long as they had the Quran and the Sunnah to hand. By thinking along these lines they have failed to link the Islamic text with the real world and lost the ability to actualize the faith. Some of them have indeed launched themselves as full-fledged organization well before determining or reforming the world of their thoughts. It followed that they began to haphazardly select notions from the real world and Muslim tradition in order to respond to the requirements of their organizations and everyday activities instead of proceeding in the light of sound and rational judgment.

5.Â Â Â Â Â Â Besides their claim to encapsulate, through their ideological platforms, the whole faith, many of these movements have claimed to embody, through organization and membership- and to the exclusion of all other groups- the whole Muslim community. This cannot but be the result of intellectual immaturity and a juvenile fondness for exclusiveness and theatrics.

Moral Values of the Quran

Morals and Manners in Islam

Most Beautiful Names of Allah