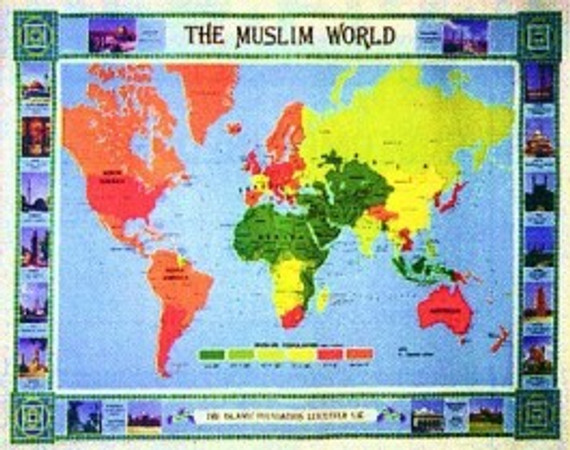 The Muslim World Map (English) Revised in 2005 is colour coded to show the population of Muslims around the world. 100cm x 70cm. Full colour

This bright and colorful poster is a map of the world that shows the percentage of Muslims in each country. Using different shades and colors, viewers get a clear idea of which countries have significant Muslim majorities, those that are in between, and those in which Muslims are minorities. It also shows the capital cities of each country and in some cases, a few countries major cities as well.Â

The map is bordered by pictures of mosques from around the world, including those from the US, France, Spain, Germany, Malaysia, Pakistan, Syria and more!

The Muslim World Map was developed by the Islamic Foundation in the UK. This most recent version was drawn up in 1994 (1414 A.H.).Â

This attractive and well-designed map is an excellent teaching tool in the classroom, the home, during events like Islam Awareness Week and for presentations. Let this attractive visual aid help you get a better grade on a presentation or gain a bigger audience at your next exhibition!Â

Stories from the Muslim World

Makers of the Muslim World

Education and the Muslim World

Makers of the Muslim World

Muslims and Christians Face to Face