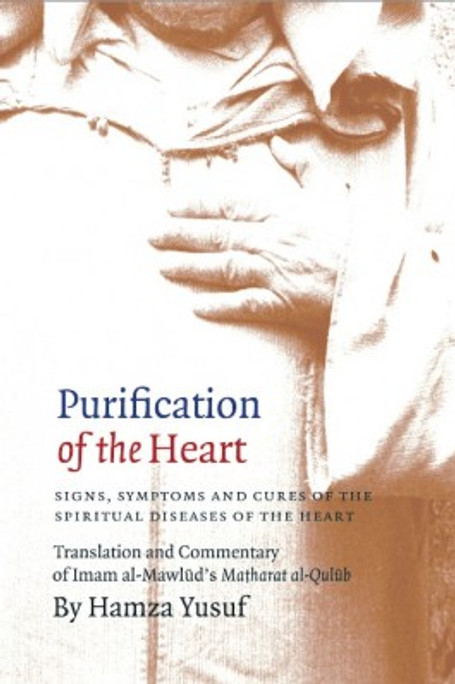 Purification of the Heart, as its title states, is a course on the vessel of human spirituality, character, and morality -- the heart. The suffering and problems that we confront in our lives on a personal and even global level actually come down to the condition of the heart. Muslim scholars throughout history have written extensively on this topic, as prompted by the well-known statements of the Prophet (peace be upon him) and verses of the Quran. In essence,Â Purification of the HeartÂ is a course on the "Greater Jihad" -- as it has been called by illustrious learned men and women of Islamic civilization -- our struggle to become better human beings, luminaries of faith and morality.

This present text is based on the poem known asÂ Matharat al-QulubÂ (literally,Â Purification of the Hearts), which offers a means by which purification can be achieved. It was written by a great scholar, Shaykh Muhammad Mawlud al-Yaqubi al-Musawi al-Muratani. As his name indicates, he was from Mauritania in West Africa. He was a brilliant scholar who mastered all of the Islamic sciences, including the inward sciences of the soul. The spiritual diseases of the heart addressed in this volume include: miserliness, wantonness, hatred, iniquity, envy, ostentation, vanity, fraud, and more. Imam Mawlud directs his attention to each of these diseases, discusses their causes, and offers cures. His teachings imply that purification is a life-long process, not something that is applied once and then forgotten. Purity of heart never survives a passive relationship. Rather, it requires constant consideration. This book hopes to introduce to readers how that is done.

The Prophet spoke about the heart in a manner that leads one to believe that its corruption means disaster for the soul and our happiness. "Purification" is not a state per se, as you will soon hear, but is a process and always so. It is called the "Greater Jihad" because the struggle never ends, so long as we live in this world. Our faith depends on winning this struggle, as does the kind of life we will meet in the Hereafter.

"If we examine the trials and tribulations all over earth, weÃ¢â‚¬â„¢ll find they are rooted in human hearts. Covetousness, the desire to aggress and exploit, the longing to pilfer natural resources, the inordinate love of wealth, and other maladies are manifestations of diseases found nowhere but in the heart. Every criminal, miser, abuser, scoffer, embezzler, and hateful person does what he or she does because of a diseased heart. So if you want to change our world, do not begin by rectifying the outward. Instead, change the condition of the inward. It is from the unseen world that the phenomenal world emerges, and it is from the unseen realm of our hearts that all actions spring. . . . We of the modern world are reluctant to ask ourselvesÃ¢â‚¬â€when we look at the terrible things happeningÃ¢â‚¬â€Ã¢â‚¬Å“Why do they occur?Ã¢â‚¬Â And if we ask that with sincerity, the answer will come back in no uncertain terms: all of this is from our own selves. In so many ways, we have brought this upon ourselves. This is the only empowering position that we can take."Â
Ã¢â‚¬â€ Excerpted from Hamza YusufÃ¢â‚¬â„¢s IntroductionÂ

Hamza Yusuf Hanson was born in Washington State and raised in Northern California. After exploring religions at an early age, he converted to Islam at 18 and set out on a journey that would take him to places of study in England, the United Arab Emirates, Saudi Arabia, Morocco, Algeria, and finally West Africa where he spent a transformative period with Murabit al-Hajj, a master of the inner and outer sciences of Islam. After a sojourn of ten years abroad, Hamza Yusuf returned to the U.S. and took degrees in Nursing and Religious Studies. In 1998, he co-founded the Zaytuna Institute in order to teach the traditional sciences of Islam to people in the West. He is recognized today as one of the most influential voices for Islam in the West and has advised several world leaders including the President of the United States and the head of the Arab League. Yusuf resides in Northern California with his wife and children.

Purification of the Heart [CDs:17]

Purification of the Heart [Tapes]

Purification of the Heart [Tapes]

Purification of the Heart [CDs:17]

Purification of the Soul (12 CD Set)

Purification of the Soul - Zarabozo

Purification of the Soul

Provisions for the Hereafter

Provisions for the Seekers