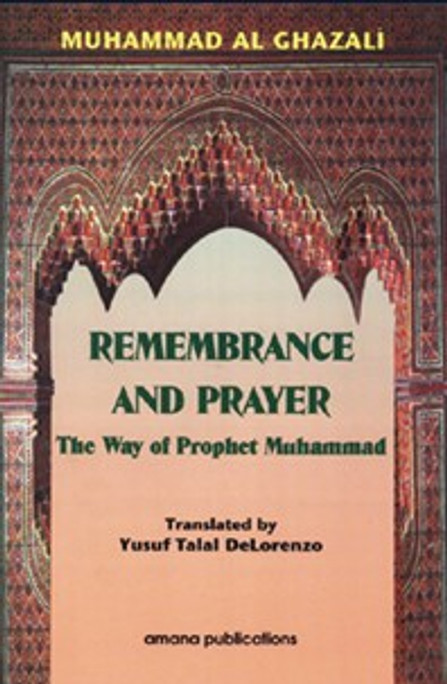 Remembrance and Prayer: The Way of Prophet Muhammad Muhammad al Ghazali Translated by Yusuf Talal DeLorenzo Shaykh Muhammad al Ghazali (1335-1416 AH/ 1917-1996 AC), the author of over fifty books on Islam, was one of the pioneers of the contemporary Islamic revival. Born in Egypt, he graduated from al Azhar University in 1360/1941 and embarked on a career of writing, lecturing, and calling people to Allah. The Shaykhs writings on contemporary ideologies and their challenges to Islam and Muslim society have been widely appreciated by Muslims all over the world. Shaykh al Ghazali served for many years in the Department of Awqaf in his native Egypt, taught at the Umm al Qura University in Makkah, and was an. Academic advisor at both Qatar University and the Islamic University of Amir Abd al Qadir in Algeria. Shaykh Muhammad al Ghazali passed on to the mercy of Allah on 19 Shawwal 1416 / 9 March 1996 in Saudi Arabia and was buried at al Madinah. Remembrance and Prayer: The Way of Prophet Muhammad, was one of the first works of Shaykh al Ghazalis to be translated into English. The book describes in vivid prose how the Prophet, upon him be peace, used to remember Allah and pray to Him. Not only are the exquisitely beautiful, deeply moving and penetrating words of the Prophet given in the English translation, but in the original Arabic as well, thus allowing those desirous of memorizing Arabic access to the original texts. The intimate relationship with Allah, which was the hallmark of the Prophets life, becomes clear and vivid. The books contents are immensely relevant. to the life and concerns of modern man, whose life has been made barren by the present secularist machinery. Yusuf Talal DeLorenzo is an American convert to Islam. He was Chief of the Translation Bureau at the Islamic Research Institute of the International Islamic University at Islamabad, Pakistan. His translations from Arabic, Urdu, and Persian include works on tafsir, fiqh, hadith, aqidah, and other classical Islamic disciplines. Yusuf Talal was formerly Advisor on Islamic Education with the Government of Pakistan, a research associate at the International Institute of Islamic Thought (IIIT) of Herndon, Virginia, and a member of the Fiqh Council of North America. He is currently Director of the Masters Program for Imams at the newly established graduate School of Islamic and Social Sciences (SISS) in Leesburg, Virginia.

Reflections on the Biography of Prophet Muhammad Peace be Upon Him

Reflections on al-Hujurat: The 49th Chapter of the Sacred Quran

Rashid and the Missing Body