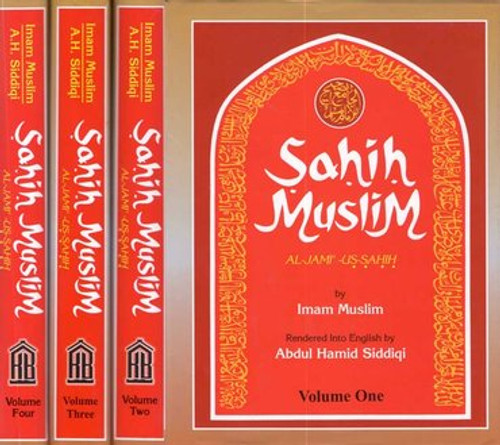 This is the Sahih Muslim set, without the original Arabic. (English translation only). Based on the original sources and brief biographical sketches of major Hadith narrators, it is the first ever attempt at the English translation with exhaustive notes combines in itself the authenticity and correctness of old scholarship and the freshness of the modern style.

Sahih Muslim is a collection of sayings and deeds of Prophet Muhammad (pbuh) (also known as the sunnah). The reports of the Prophets sayings and deeds are called ahadith. Muslim lived a couple of centuries after the Prophets death and worked extremely hard to collect his ahadith. Each report in his collection was checked for compatibility with the Quran, and the veracity of the chain of reporters had to be painstakingly established. Muslims collection is recognized by the overwhelming majority of the Muslim world to be one of the most authentic collections of the Sunnah of the Prophet (pbuh). Muslim (full name Abul Husain Muslim bin al-Hajjaj al-Nisapuri) was born in 202 A.H. and died in 261 A.H. He travelled widely to gather his collection of ahadith, including to Iraq, Saudi Arabia, Syria, and Egypt. Out of 300,000 ahadith which he evaluated, only 4,000 approximately (including multiple hadith in a single one i.e. multiple quotations) were extracted for inclusion into his collection based on stringent acceptance criteria. Muslim was a student of Bukhari.