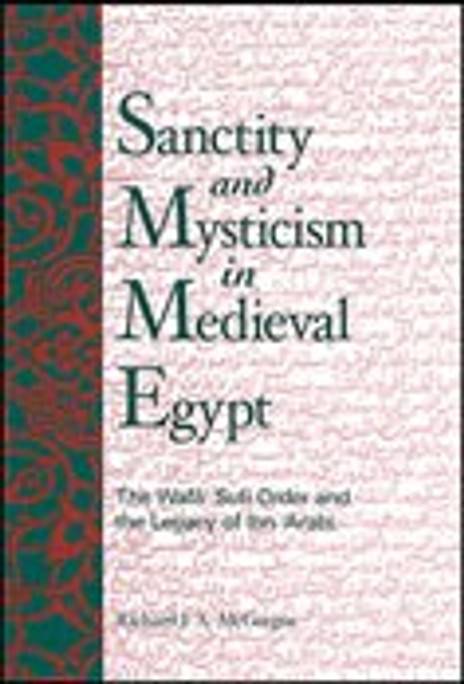 Sanctity and Mysticism in Medieval Egypt The Wafa Sufi Order and the Legacy of Ibn Arabi Richard J. A. McGregor - Author $27.95 Paperback - 246 pages Release Date: January 2006 Summary Using the original, little-known writings of Sufis Muhammad and Ali Wafa, this book explores the development of the idea of Islamic sainthood in the post-Ibn Arabi period. Using the original writings of two Egyptian Sufis, Muhammad Wafa and his son Ali, this book shows how the Islamic idea of sainthood developed in the medieval period. Although without a church to canonize its saints, the Islamic tradition nevertheless debated and developed a variety of ideas concerning miracles, sanctity, saintly intermediaries, and pious role models. In the writings of the Wafas, a complete mystical worldview unfolds, one with a distinct doctrine of sainthood and a novel understanding of the apocalypse. Using almost entirely unedited manuscript sources, author Richard J. A. McGregor shows in detail how Muhammad and Ali Wafa drew on earlier philosophical and gnostic currents to construct their own mystical theories and notes their debt to the Sufi order of the Shadhiliyya, the mystic al-Tirmidhi, and the great Sufi thinker Ibn Arabi. Notably, although located firmly within the Sunni tradition, the Wafas felt free to draw on Shiite ideas for the construction of their owntheory of the final great saint. â€œThis excellent work provides a stimulating historical, cultural, and intellectual account of the Wafa Sufis and their mystical philosophy and cosmology. It is a must for those interested in the development of the medieval Egyptian Sufi idea of walaya, in Ibn Arabiâ€™s tradition.â€ â€” Studies in Religion An excellent book. With care and insight, Richard J. A. McGregor illuminates the personalities, cultural context, and intellectual currents surrounding the Wafa Sufis, revealing a remarkable chapter in the history of Sufism and in the development of mystical philosophy and cosmology in Islam. â€” Michael A. Sells, editor and translator of Early Islamic Mysticism: Sufi, Quran, Miraj, Poetic and Theological Writings and author of Mystical Languages of Unsaying Richard J. A. McGregor is Assistant Professor of Religion at Vanderbilt University. Table Of Contents List of Illustrations Acknowledgments Note on Transliteration Introduction 1. Tirmidhi, Ibn Arabi, and Others on Sanctity Tirmidhi on Walaya Sahl Tustari on Walaya Lesser Treatments of Walaya Walaya and Shiism Ibn Arabi and Walaya 2. The Early Shadhiliyya and Sanctity Literature and History of the Shadhiliyya Al-Shadhili, Tirmidhi, and Ibn Arabi The Early Figures of the Order The Writings of Ibn Bakhila Proximity to the Divine The Levels of Walaya Sanctity and Prophecy 3. The Wafaiyya in Time and Space Arriving from the Maghreb Among the Elite of Cairo 4. The Writings of the Wafas Poetry Supplications (dua) Jurisprudence (fiqh) and Exegesis (tafsir) Mystical Treatises (Muhammad Wafa) Mystical Treatises (Ali Wafa) 5. Sanctity and Muhammad Wafa Absolute Being and Its Self-disclosure The Preexistential and the Everlasting Spiritual Anthropology Cosmology The Teaching Shaykh and Beyond The Muhammadan Reality and the Pole Sanctity, the Renewer, and the Seal 6. Sanctity according to Ali Wafa Divine Oneness, Self-disclosure, and Creation The Teacher and Oneness On Walaya and Nubuwwa The Seal of Sainthood The Seal and the Renewer of Religion Conclusion Notes Bibliography Index

The Queen of Egypt (Colouring Book)

Politacal and social Protest in Egypt

Salat & Salam: In Praise of Allahs Most Beloved

Salaat:The Islamic Prayer from A to Z Book