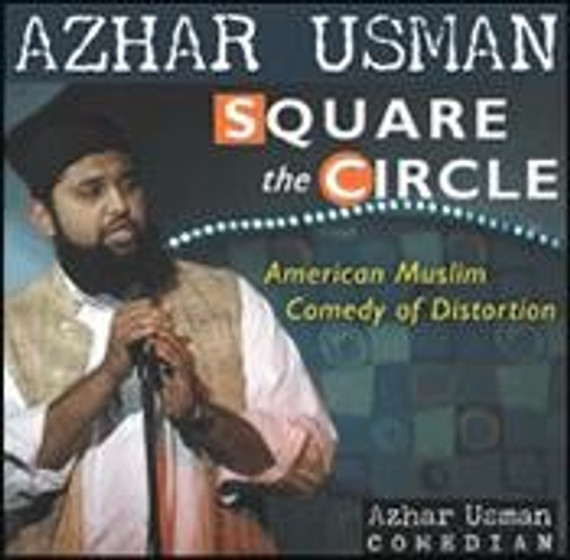 SQUARE THE CIRCLE: American Muslim Comedy Azhar Usman is a standup comedian, lecturer, and community activist. Azhar was born and raised in Chicago. Azhar graduated with a Communications degree from University of Illinois at Chicago and received his law degree from University of Minnesota. Azhar has been performing standup comedy since 2001. Since mid-2002, he has performed in many cities around the world. Azhar also helped form the Allah Made Me Funny tour. Azhar has been featured in several major publications around the world, including The New York Times, The Dallas Morning News, The Daily Telegraph of London, Sydney Morning Herald of Australia, Al-Ahram Weekly of Egypt, DAWN Online of Pakistan, and many more. Azhar Usman currently resides in Chicago, Illinois with his wife and two children. About the CD: SQUARE THE CIRCLE: American Muslim Comedy of Distortion is a pioneering work by American Muslim standup comedian Azhar Usman. Hilariously entertaining comedy in its essence, SQUARE THE CIRCLE is a fascinating insight into life and living as a Muslim in 21st century America. Unique in its genre because of his rigorous ethical and moral standards for clean humor, Usmans comedy is G-rated fun for the whole family. By balancing self-deprecation, introspection, and everyday observational humor, Usman has made an important cross-cultural contribution to the comedic artsâ€”particularly at a time when Western Muslims struggle to carve out their unique cultural space like the minority Muslim communities before them, by doing the seemingly impossible: squaring the circle. About the Title: â€œSquare the circleâ€ is an expression of geometric and theological significance. Though a simple expression incorporating two simple shapes, its complexity lies in the logically impossible task of reconciling the two with one another, much like the paradox of man in relation to the Divine, a circle on top of a square (as architecturally represented by a traditional mosque structure of a dome atop a cube), or even being an â€œAmerican Muslim.â€ â€œComedy of distortionâ€ is a specific comedic technique or pattern of ethnic humor that involves the distortion of stereotypes and pre-existent audience perceptions. See Theories of Ethnic Humor: How to Enter, Laughing, by John Lowe, in the American Quarterly, pages 453-4 (1986). Tracks: 01 Disclaimers (2:38). 02 Salam Diversity (2:31) 03 Media Hype (3:42) 04 Operation Iraqi Liberation (O.I.L.) (3:52) 05 Inside Your Local Mosque (feat. Uncle Letmesplainyou) (4:20) 06 Converting Is-hard (2:26) 07 Culture versus Religion (4:38) 08 Iqamat al-Din (feat. Sheikh Abdul the Radical Imam) (3:19) 09 Cats & Doggs (3:35) 10 Nomenclature (2:24) 11 Fair Trial in America (3:21) 12 Family Feud (2:02) 13 Uncivil Rights (2:48) 14 No Laughing in Prayer (2:32) 15 Foot in the Sink (3:26)

Spring of Zamzam and other Stories (Quran Activity Book)

Spread of Islam in the World

Children's Stories from the Quran- Book 1

Stories from the Hadith