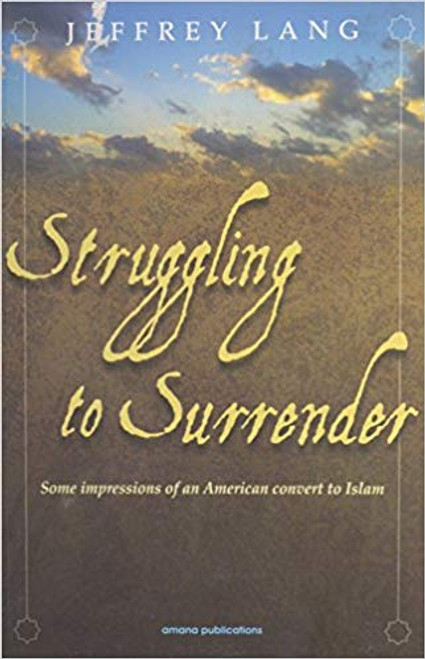 Struggling to Surrender Dr. Jeffrey Lang A personal account of one mans journey in search for God in the midst of a culture that places minimal value on such a quest. Struggling to Surrender: Some Impressions of an American Convert to Islam is a very personal account of one mans search for God and meaning in the midst of a culture that places no value on such a quest. Dr. Lang was brought up as a Catholic and educated in a Catholic school. However, one day he found that his religious beliefs could no longer provide satisfactory answers to his questions. And so his quest began: reason, agnosticism, atheism, and, finally coincidence - a chance encounter with a Muslim student in one of his classes that eventually led to his conversion. As he soon found out, however, this was not the end of the matter, for now he had to fit in with his new community, its beliefs and traditions, and the Islamic worldview and lifestyle. For American Muslims, most of whom come from a Judeo-Christian background and a mental framework that is almost totally alien to that of a traditional Muslim, this is no easy feat. How does one deal with demands for the blind acceptance of hadiths and accepted interpretations, the gulf between what the Quran says and the reality of Muslim life, the status of women, the presence of religion in every sphere of ones life, cultural conflicts, and many other issues? Ever since his conversion, Dr. Lang has struggled to answer these questions for himself. At the request of numerous Muslim acquaintances, he decided to write about his experiences so that other American and western-educated Muslims could benefit from his insights.

Struggling to Surrender: Some Impressions of an American Convert to Islam (E-Book)

Struggling to Surrender: Some Impressions of an American Convert to Islam (E-Book)