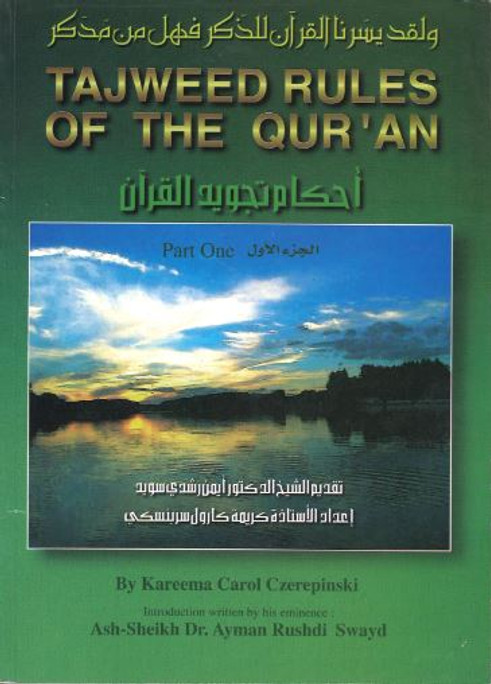 This is a guide for studying tajweed. The student who uses this bookis expected to have a basic grasp of Arabic before starting thiscourse. The student should know all the Arabic letters and vowels andbe able to read at an elementary level. This book is either for anEnglish speaking student studying the Qura'an in an Arabicenvironment, but needing explanation of the Arabic terms in English,or a student studying the explanations of tajweed in English, butlearning the basic concepts in Arabic so they may integrate into theArabic terms and definitions throughout the book, since the science oftajweed is an Arabic science.

This book explains the articulation points of the Arabic letters, therules of noon saakinah, meem saakinah, and lam saakinah. It explainsall of the different lengthenings (mudood), and how voweled, andnon-voweled letters are formed. The qalaqah mechanism is explained inthe last chapter. Terms are introduced in Arabic, and the translatedinto English. Explanations are done in English, but with integrationof Arabic terms, as they are learned.

A student of the Qur'an cannot except to learn tajweed simply bystudying this book. The learning of proper Qur'anic recitation canonly be done by listening to a qualified Qur'an teacher recite, thenreciting to them and receiving corrections from the teacher.

Tajweed and Memorization Quran in Velvet

The prophet`s connection with youth