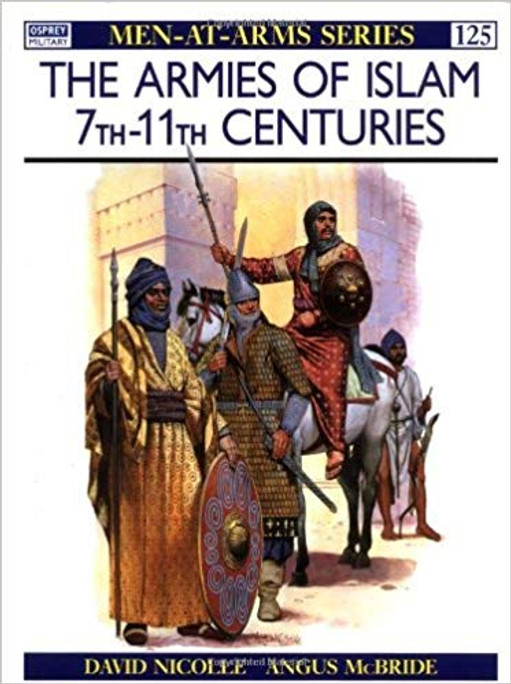 ABOUT THIS PRODUCT
During the Middle Ages Islam was Christian Europe's only civilised and most troublesome neighbour, the Middle Ages saw almost continual strife between these two distinct cultures. By the time the Frankish Crusaders reached the Middle East at the end of the 11th century Islam had already incorporated three major races: Arabs, Persians and Turks, each of which contributed different strengths to the armoury of Islam. This title explores the organisation, uniforms and equipment of the armies of Islam from the 7th to 11th centuries, backed by illustrations, museum photographs and eight full page colour plates by popular Osprey artist Angus McBride.
BIOGRAPHICAL NOTE
David Nicolle was born in 1944 and was educated at Highgate School. For eight years he worked in the BBC Arabic Service. In 1971 he went 'back to school', gaining an MA from the School of Oriental and African Studies and a PhD from Edinburgh University. For some years he taught art and architectural history at Yarmuk University, Jordan. David has written many Osprey titles, including MAA 140 Armies of the Ottoman Turks, MAA 320 Armies of the Caliphates 862-1098, and Campaign 43 Fornovo 1495. Angus McBride is one of the world's most respected historical illustrators, and has contributed to more than 70 Osprey titles in the past three decades. Born in 1931 of Highland parents but orphaned as a child, he was educated at Canterbury Cathedral Choir School. He worked in advertising agencies from 1947, and after national service, emigrated to South Africa. He now lives and works in Cape Town.
CONTENTS
Chronology Introduction The First Muslim Armies The Successor States European Influence in al Andalus Tactics and Styles of Combat The Plates

Shades of Islam: Poems for a New Century

The Army of Elephants

The Ark of Nuh

The Arabs Journeys Beyond the Mirage

The Army of Elephant [PB]

The Army of Ants,The Powerful Jinn

The Art of Islamic Banking and Finance

The Army Walks Through The Valley [PB]

The Ark of Nuh and the Animals (Coloring Book)

The Ark of Nuh and the Great Flood [Sticker Book]