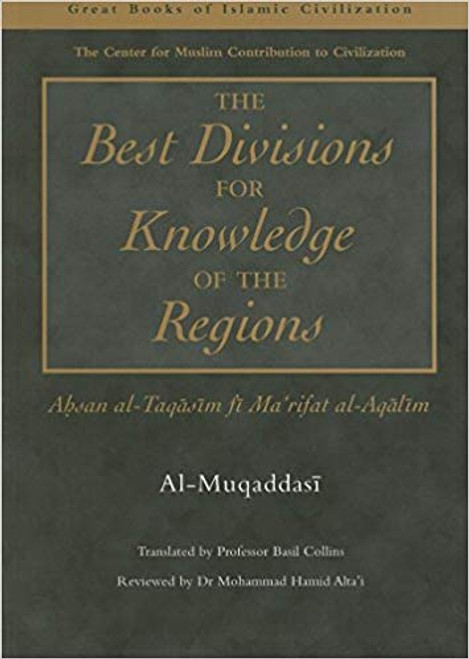 Translated by Professor Basil Collins Reviewed By Dr Mummad Hamid Alta'I. Mugaddasi was born in the year 945 of the Common Era (CE),
which corresponds to the year 334 of the Islamic calendar (AH), and
died towards the close of the millennium. Defining the area of his study as that where the presence of the religious and political institutions of Islam dominated, he travelled throughout the regions observing, enquiring, researching, taking notes and writing drafts. His work was eventually published in 985cE/375AH, and a revised edition was produced three years later.
Early in the second half of the nineteenth century the German orientalist Aloys Sprenger brought to the attention of the West a manuscript of al-Mugaddasi's work. Sprenger's enthusiasm over the content of the manuscript was reflected in his judgment that its author was the greatest geographer of all time. The translation by Basil Collins published here is the first rendition into a Western language of al-Mugaddasi s treatise.
Al-Muqaddasi s work bespeaks an interested and interesting man, seeing his world through a frame of reference derived from his deeply held religious beliefs, yet capable of making assessments with probity and common sense, striving to get at the truth of the natter.

English Translation of the Meaning of Al-Quran : The Guidance for Mankind

Duas for All of Us