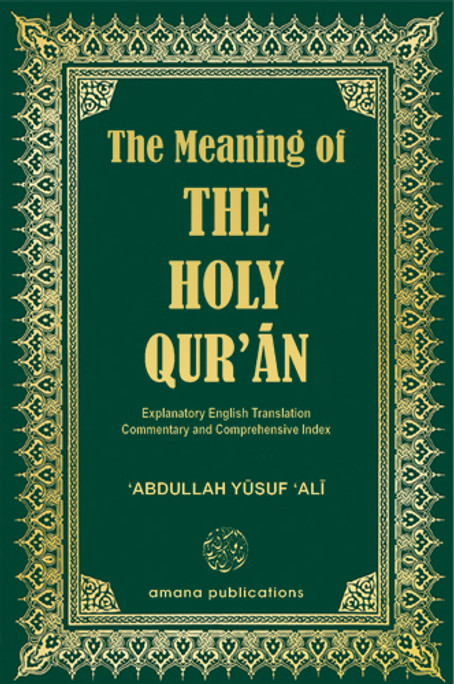 THE MEANING OF THE HOLY QUR'AN

This first English only edition is the product of cumulative experiences gained over the past three decades in publishing the meaning of the Qur’an in several languages. Amana publications has been blessed in undertaking publication of this great work of the late ‘Abdullah Yusuf ‘Ali with the highest standard of scholarship and authenticity that his work deserves. In response to repeated requests of readers to publish an explanatory English translation along with commentary and comprehensive index of this work of ‘Abdullah Yusuf ‘Ali, amana publications has devoted its best efforts to bring this first English only edition of The Meaning of The Holy Qur’an.

On April 4, 1872, ‘Abdullah Yusuf ‘A1i was born in  a family of the Bohra community in Surat, India. His father, a merchant, was a very religious man who made sure that his son learned Qur’an before anything else. Upon the completion of young ‘Abdullah’s committing the entire Qur’an to memory, his father celebrated the occasion with a grand banquet, thus showing to his son the importance of his achievement and the importance of the Qur’an. In addition to studying  contemporary knowledge at school, ‘Abdullah continued to receive lessons in Arabic language and never ceased in his studies of the Qur’an. He was a superior student who excelled in academic achievement and won the much coveted Indian Civil Service Award, a prestigious honor resulting from the extremely competitive entrance examinations for high positions in the Indian Civil Service which wealthy families would aspire for their sons to receive. ‘Abdullah was easily able to absorb English literature and was considered to be among the best of his fellow countrymen in writing English. Many of the most well-known scholarly magazines in India published his works and expressed their appreciation for his beautiful literary style. Later, ‘Abdullah Yusuf  'Ali left India for Europe and visited many European capitals and eventually resided in London for a considerable period of time.

While in London, he was exposed to many translations of the Qur’an and continued to have a tremendous interest in it and its studies. He then began to closely study the Qur’an giving special attention to its various interpretations, both old and new. After studying what was written about the Qur’an in both European and Eastern  languages, he returned to India and took up new residence in Lahore where he became the  Dean of the Islamic College. He then began his monumental work of translating and commenting on the Qur’an which after three full years of work was completed on his 65th birthday.

Meanings of the Holy Qur’an (E-Book)