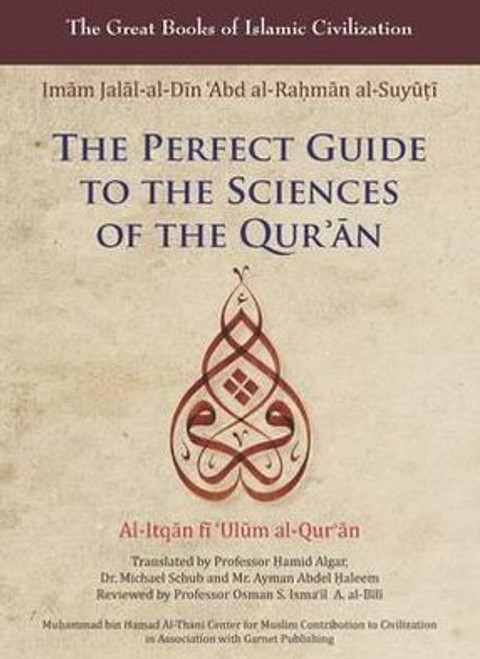 The Perfect Guide to the Sciences of the Qu'ran: Al-itqan Fi 'ulum Al-Qur'an by Imam Jalal-Al-Din Al-Suyuti

Imam Jalal-al-Din al-Suyuti (849-911 AH / 1445-1505 AD) was born, lived, and was buried in Cairo. The ascription 'al-Suyuti' is a reference to Asyut, a town in Upper Egypt from which his family hailed. Known as the 'son of books' from the numerous books he studied and referred to in his works, he could equally be called the 'father of books' because of the many books he produced. From his early years, al-Suyuti devoted his life to learning, reading, writing, and teaching - holding notable positions in the city of Cairo at a time when it was the center of Islamic learning par excellence. He was an outstanding scholar, second to none in the field of Qur'anic Sciences ('Ulum Al-Qur'an) in which he produced many well-known works. However, being the all-round scholar that he was, his contributions covered almost all the fields of Arabic, the Qur'an, the Traditions (hadith), and history. His works were of such superb quality that they earned him the respect of his generation and the generations that followed, up to the present day. Most important of these, in the field of Qur'anic Sciences, was his Al-Itqan. Al-Itqan is perhaps the most outstanding work of its kind in the field of Qur'anic Sciences. Exhaustive in its sources and its subjects, thoughtfully and lucidly written, the work is also well arranged. Readers will be taken by the depth, breadth, scope, and mastery of the author while noting how much Muslim scholars have devoted to the study of the Qur'an and how varied and diverse were the fields in which those studies were made. The work found its way to many circles both near and far in the Islamic world. The translation presented here is of a publication of four volumes published in 1387 AH (1967 AD). Now in paperback, this book is the translation of the first volume. It is a must to the specialist of Qur'anic Studies and is highly recommended to the initiate.

A Guide to the Contents of the Qur'an

The Qur'an and Modern Science- USED

Teachings of the Qur'an Textbook: Volume 3

The Bible The Qur'an And Science