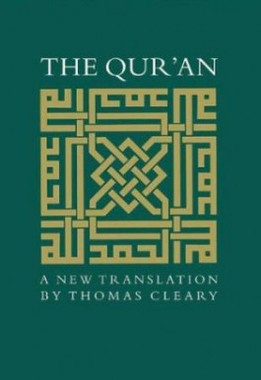 The Quran: A New Translation Thomas Cleary This is a new and complete translation of the Qurâ€™anâ€”the Islamic scriptureâ€”by one of the premier translators of religious texts in the world. The meanings of this sacred text are rendered into the English language with subtle touches of poetry and crisp prose, allowing the reader an opportunity to understand not only the evident meaning of the Qurâ€™an but something of the soul and spirit it evokes. This direct and timely rendition is an essential source for the modern reader. Thomas Cleary â€“ Holding a Ph.D. in East Asian Languages and Civilizations from Harvard University, he is the translator of over fifty volumes of Buddhist, Taoist, Confucian, and Islamic texts from Sanskrit, Chinese, Japanese, Pali and Arabic- including the best-selling Art of War.