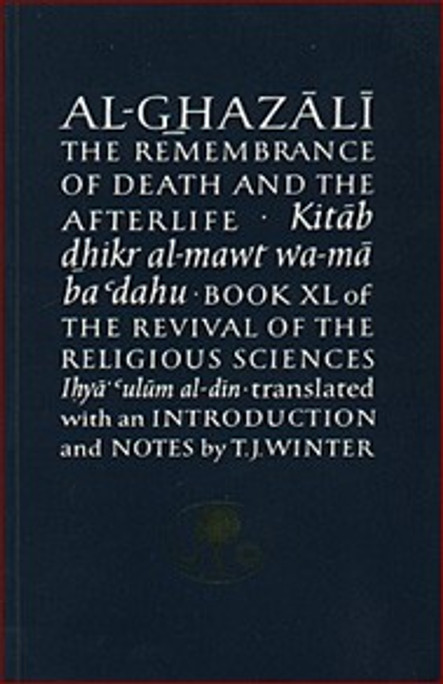 Translated by: T.J.Winter
This is the first English translation of the last chapter of Al-Ghazaliâ€™s Revival of the Religious Sciences (Ihyaâ€™ â€˜Ulum al-Din), widely regarded as the greatest work of Muslim spirituality. After expounding his Sufi philosophy of death and showing the importance of the contemplation of human mortality to the mystical way of self-purification, Ghazali takes his readers through the stages of the future life: the vision of the Angels of the Grave, the Resurrection, the Intercession of the Prophet, and finally, the torments of Hell, the delights of Paradise and - for the elect - the beatific vision of Godâ€™s Countenance.

â€˜This book is an excellent translation of a very important work...This translation and the series as a whole, are significant contributions to our understanding of this key figure in Islamic intellectual thought.â€™ Oliver Leaman (BRISMES Bulletin)

â€˜Winterâ€™s rendering combines exactness with fluency and dignity of style. The introduction, notes, appendix, bibliography, index - all make this an exemplary publication, produced to the highest standards.â€™ Christian Troll (CSIC)

â€˜Of considerable value and solace to many who will buy it for reasons both religious and academic.â€™ H.T. Norris (BSOAS)

The Sources of the Quran: A Critical Review of the Authorship Theories