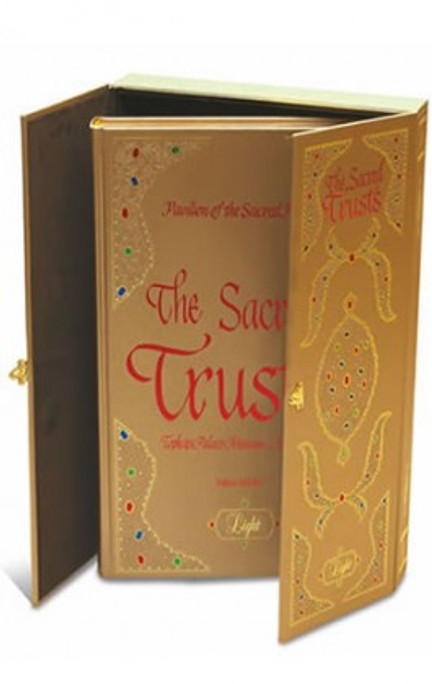 The Sacred Relics entrusted to the reader

Topkapi Palace was the residence of many Sultans and welcomed many visiting kings and ambassadors for centuries. However, what makes the palace so special is not only the former residents, but the Sacred Relics, which include personal belongings of prophets. Excavated from the most private and hidden rooms of the palace, the entire selection is compiled here for the first time, including those that are not on exhibit for daily visits. From the staff of Prophet Moses to the Mantle of Prophet Muhammad, peace and blessings be upon them, the Sacred Relics which Ottomans preserved in Topkapi Palace for centuries paying utmost respect, are presented in this book.

When Sultan Selim returned from the Egyptian campaign (1517), he brought to Istanbul the Sacred Relics from the treasuries of the Mamluk state, Abbasid Caliphate, and Hijaz Emirate.

Sultan Selim I began to collect the Sacred Relics at Topkapi Palace , and his successors continued the tradition until the beginning of the twentieth century. The sultans gathered the relics of the Prophet and other great Muslims, as well as items from respected religious sites. At the beginning of the nineteenth and twentieth centuries, protecting relics from potential damage by the Wahhabis was a major concern. The Wahhabis thought those who showed reverence to objects were guilty of polytheism, so relics were sent to Istanbul for protection and care. During World War I, when the surrender of Madina was being considered, the citys guardian, Fahreddin Pasha, sent a number of valuable gifts which had been received over the centuries, along with some Sacred Relics, to Istanbul .

The items that belonged to the Prophet are calledÂ Amanat(Trusts), while the items belonging to other great Muslims or sacred places are calledÂ TabarrukatÂ (Sacred Objects). Today, all the items are called â€œSacred Relics,â€ but in the past they were registered as Blessed Relics (Â Al-Amanat al-MubarakaÂ ).

The Ottomans did not attribute any holiness to material objects; yet, they were well aware that property belonging to the Messenger of God had a share of divine blessings.

Tahsin Ã–z wrote the following in his bookÂ Emanat-i MukaddeseÂ [The Sacred Relics] published in 1953: â€œThe Sacred Relics were collected thanks to various historical manifestations of fate throughout centuries. This treasure passed to Turks piece by piece by efforts motivated by faith and sometimes by fortune. It is clear that they are not only sacred objects collected and preserved with a religious bond and love, but are valuable by world standards artistically and historically as well. The care and traditional respect shown for the protection of these sacred objects so far has been infinite. As long as we exist, this sacred duty will be performed with love, respect, and honor.â€

Among all sacred relics, the Holy Mantle of Prophet Muhammad holds a special place. Due to their respect for this honorable memory from the Prophet, the sultans preserved it in gold cases in the Throne Room. Therefore, the entire complex which included the Throne Room, Audience Hall, dormitory for pages, and the Treasury hosted became to be called Apartments of the Holy Mantle.

Prophet Muhammad, peace and blessings be upon him, met opposition and resistance when he began calling people to Islam. One of his opponents was the poet Kaâ€˜b. After the conquest of Makka, the poet began to hide. Having been reprimanded by his brother, Kaâ€˜b felt regret. Taking a risk, he secretly went to Madina in disguise and approached the Prophet to ask whether a person who repented his mistakes and embraced the faith would be forgiven or not. After the Messenger answered in the affirmative, the poet asked, â€œEven Kaâ€˜b ibn Zuhayr?â€ When the Prophet affirmed this, too, Kab revealed his identity and began to read a poem, â€œOde to the Mantle,â€ which would become famous. As a reward the Messenger of God took off his mantle and put it on Kaâ€˜b ibn Zuhayrs shoulders.

The collection consists of many objects, like Prophet Muhammads mantle, standard, sandal, cup, footprint on a stone, swords, bow, his tooth that broke at Uhud, soil he used for ritual ablution, and his seal. They also include a cooking vessel of the prophet Abraham; the turban of the prophet Joseph; the sword of the prophet David; a strand from Abu Bakrs beard; the Quran that is believed to be the one Caliph â€˜Uthman ibn â€˜Affan was reading when he was assassinated; swords of the Prophets companions; Fatima al-Zahras blouse, veil, and mantle; her son Husayns robe, his turban, and a piece of his mantle; Imam Abu Hanifas robe; Uways al-Qaranis felt cap; the crowns of â€˜Abd al-Qadir al-Jilani and Imam Sharani; the bowls of Jalal al-Din al-Rumi; the gold rain gutters of the Kaâ€˜ba; the gold and silver covers of the Black Stone; a wing of the Door of Repentance; the lock, keys, and covers of the Kaâ€˜ba; objects like hooks, candles, censers a nd rosewater flasks which were used in the Kaâ€˜ba or inÂ Masjid al-NabawiÂ (the Prophets Mosque); pieces of wood, stone, glass, porcelain tile, etc. used in repair of these places; covers and soil from the Prophets tomb; and the dust calledÂ Jawhar al-SaadatÂ [The Jewel of Bliss] which was collected while cleaning the Prophets tomb. There are also items used for preserving the Sacred Relics through time, or for their transport from the Kaâ€˜ba, such as chests, drawers, covers (embroidered or plain), bundle wrappers, scabbards, andÂ rahleÂ s (low reading desks). In addition, there are brooms and dust pans used to clean the Privy Chamber; candles; aloe wood; framed inscriptions written by famous calligraphers or the sultans; writings describing the virtues of the Prophet (Â hilyaÂ ); prayer rugs and prayer beads; copper and silver bowls; candles; dervish headgear;Â zamzamÂ water pitchers; and handkerchiefs and blocks for printing on handkerchiefs.

About the author:Â Having specialized in art history, Hilmi Aydin is currently the deputy manager of the Topkapi Palace Museum , Istanbul . He used to be the divisional manager of Pavilion of the Sacred Relics until recently appointed to the current position.

Women Companions of the Holy Prophet and Their Sacred Lives