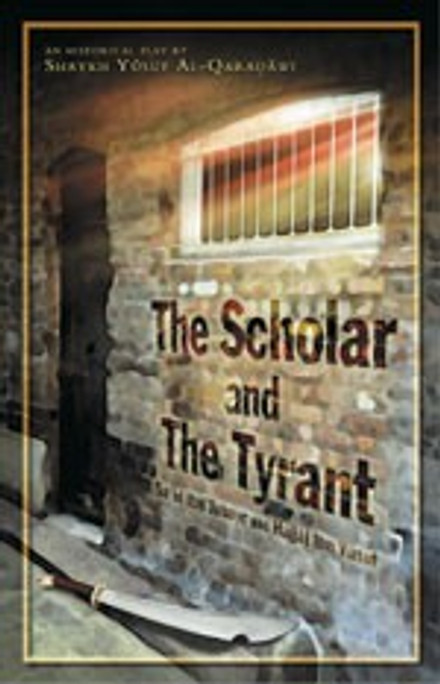 The Scholar & The Tyrant Shaykh Yusuf al-Qaradawi Product Overview... In this short book written by Shaykh Yusuf Al-Qaradawi, the events between Hajjaj Ibn Yusuf and Said Ibn Jubayr are presented in the form of a play - a format rare and unique in contemporary Islamic literature. The author highlights the steadfastness of truth and its strength in front of false tyranny represented in the personality of Hajjaj, whom Allah had taken mercy away from his heart. He would not be satisfied except from the killing of Muslims and Companions of the Messenger in their thousands. The most prominent among them was Abdullah Ibn Zubayr, may Allah be pleased with him. An Extract from the Book... Private and Public Libraries One of the Caliphs sent for a certain scholar to talk to him. When the servant found the scholar, he found him sitting and engrossed in reading whilst around him were many books. He said to him: You have been called by the Amir al-Mumineen. He replied: Tell him that I am presently in the company of great learned men and philosophers and engaged in conversation with them. When I have finished with them, I will come and see him. The servant returned and informed the Caliph. He asked the servant: Who are those learned men and philosophers engaged in conversation with him. The servant replied: By Allah, O Amir al-Mumineen! I did not see anyone there. The Caliph said: Bring him here at once. When he came, the Caliph asked him: Who were those learned men who were keeping you company. He replied: O Amir al-Mumineen They are companions whose talk does not bore you; Present or absent they are constant and trustworthy. When we in seclusion their talk is very beneficial And helpful in taking away anxieties and worries. They benefit us with their knowledge; knowledge of what has passes With wisdom, affability, prudence and sound opinion. You will neither have any apprehension nor fear of discourtesy Nor dread of any injury from their hand or their tongue. If I said that they are dead, I would not be a liar And if I say they are living, I would not be lying. The Caliph on learning that what he meant by learned people gathered with him was the books of the scholars and learned people, did not reprimand him for not responding to his call immediately. About the Author... Shaykh Yusuf al-Qaradawi was born in Egypt in 1926. He memorized the Quran before the age of 10 and studied at Al-Azhar from the elementary to the university level, and obtained his Ph.D. in 1973. He worked as a khatib, teacher, and writer in both the Department of Awqaf and at Al-Azhar. Presently Shaykh al-Qaradawi is the Dean of the Faculty of Shariah and Islamic Studies at the Univeristy of Qatar. He is the President of the European Council for Fatwa and Research. He has published over 100 books dealing with various aspects of Islamic life, literature and poetry. Many scholars consider him to be a mujtahid of the Modern Age. He has been active in the field of dawah and the Islamic Movement for more than half a century.

The Garden of Hadith Scholars

Aisha - The Wife, the Companion, the scholar (Spanish)

The Spread of Islam in France

The Sleepers in Cave and Yunus in Whale [PB]