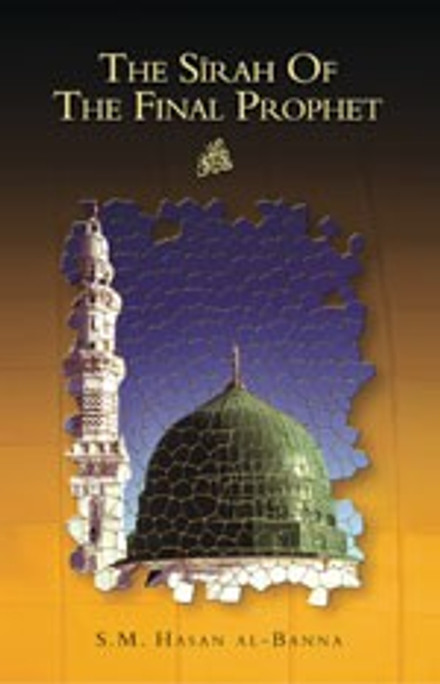 Sirah of the Final Prophet (s) S.M. Hasan al-Banna Product Overview... This is a simple, concise and authentic account of the life of the Prophet Muhammad (pbuh). Many books have been written on this subject but this unique book is characterized by the following: 1 Ideal for teenagers, introducing them to the Sirah of the Final Prophet (pbuh) 2 Comprehensive coverage of all major events 3 Simplicity of language and expression 4 Uses Quranic verses to supplement the manuscript An extract from the book... The Quran is Revealed The analysis of the above ayahs (verses), show three stages for the cause in which he was to strive for: 1 Personal reform, so that one worships Allah alone in totality and avoids all forms of wrong doings and disobedience (al-Islahul Fardi). 2 Impressing on others the reality of their existence and final destiny; that they are Allahs servants and will return to Him after death (Dawah and Inzar); hence establishing the rule of Islam in society (Iqamat al-Din). 3 Remaining steadfast in the face of difficulties and opposition which afflicts oneself when attempting to reform both oneself and society (al-Sabr wal-Istiqamah). 4 Uses Quranic verses to supplement the manuscript The verses proved to be a turning point in the life of Prophet Muhammad (pbuh). He would no longer retreat into continual solitary confinement; rather he was now entrusted with the duty of conveying the message of Islam to mankind (Dawah) and initiating a movement for the dominance of Islam over all other ways of life (al-Harakatul Islamiyyah). He was not to change society partially; as it is futile to implement partial good in some aspects of life. Partial good can be seen in every mission and even in bad systems there is a random good. Thus the message of Islam was not to be a negative protest against the existing order but a comprehensive ideal and a system of life (Nizam un Shamil) for a collective transformation of society. The mission was total reform of life; social upliftment, the establishment of the rule of Allah in order to be His slave. The Prophet (pbuh) realized from the outset that his mission would be difficult to accomplish. For a period, revelation ceased and the Prophet (pbuh) began to worry, thinking that Allah had forsaken him. However Angel Jibrail came with the following verses: By the forenoon; And by the night when it is still; Your Lord has neither forsaken you nor hated you. And indeed the hereafter is better for you than the present. And verily your Lord will give you so that you may be pleased. Did He not find you an orphan and gave you a refuge. And He found you unaware and guided you. And He found you poor and made you rich. Therefore, treat not the orphan with oppression and repulse not the beggar. And proclaim the grace of your Lord. (Quran, 93-11). About the Author... S. M. Hasan al-Banna studied Islamic Sciences under his father Shaykh Abdul Qadir. Upon completing his A-Levels, he went to study Arabic at the European Institute of Islamic Studies in France. He later travelled to Egypt and studied Arabic Language and Literature at the University of Alexandria. He has a BA in Arabic and Law (SOAS, University of London) and has also completed his Bar Vocational Course qualifying as a Barrister. He is the Former President of SOAS Islamic Society and is currently pursuing a doctorate at the prestigious Al-Azhar University in Cairo, Egypt.

Sirah of our Prophet A Mercy to Mankind - Textbook 3

Sirah Of Our Prophet A Mercy To Mankind - workbook 3

Sirah Of Our Prophet A Mercy To Mankind - Textbook 3

Sirah Of Our Prophet A Mercy To Mankind - Workbook3

The Seerah of Prophet Muhammad (PBUH)

Selections from the Noble Read

Self-Disclosure of God, The