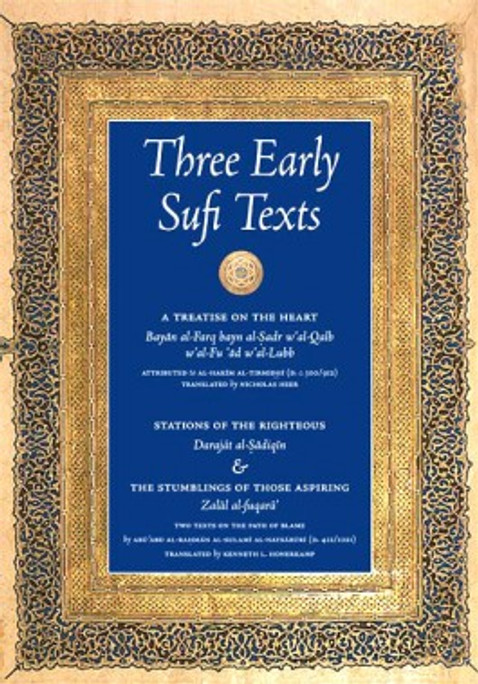 A Treatise on the Heart

The Stumblings of Those Aspiring

Stations of the Righteous

The three Sufi texts published in this volume all deal with some aspect of the Sufi path to God. The Sufi path is marked by a number of different stages or stations (maqam/maqamat) which the Sufi traveller (salik) passes through as he advances on the path. On his way the Sufi also experiences various psychological and emotional states (hal/ahwal). These states differ from the stations through which the Sufi passes in that the states are transitory experiences granted to him by God and over which he has no control, whereas the stations are permanent stages on the path which he has achieved through his own individual effort.

The enumeration of these states and stations and discussions of the distinction between them may be found in such classical Sufi works as al-Kalabadhis Ta`arruf, al-Sarrajs Luma`, al-Qushayris Risalah and al-Hujwiris Kashf al-Mahjub. There are, however, considerable differences among these writers with respect to the enumeration and description of these stations and states. The existence of such differences should not be surprising since the descriptions of the stations and states found in these works are based on knowledge gained through interior Sufi experiences rather than on knowledge gained through the external senses.

The Sufi path to God, however, is not an easy one. The Sufis progress along the path is hindered by the machinations of the self (nafs), that is, the ego-self or what is called in the Quran the self that incites or exhorts to evil (al-nafs al-ammarah bi-al-su). In order to maintain his progress along the path to God the Sufi must be able to control the ego-self by disciplining it, and by continually blaming and abasing it.

Of the three Sufi works included in this volume, the first two, Bayan al-Farq, attributed to al-Hakim al-Tirmidhi, and al-Sulamis Darajat al-Sadiqin, deal primarily with the stations and states of the Sufi traveller on the path to God. The third, al-Sulamis Zalal al-Fuqara, on the other hand, deals with the disciplining and abasement of the ego-self or self that incites to evil. We hope the publication of these three Sufi texts in English translation will contribute to a greater appreciation of Islam and its mystical aspects.