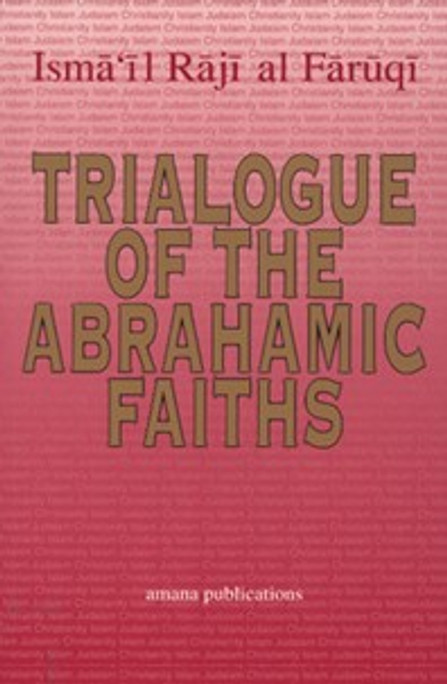 Trialogue of Abrahamic Faiths Edited by Ismail Raji al Faruqi This book, Trialogue of the Abrahamic Faiths, edited by the late Dr. by Ismail Raji al Faruqi is certain to be hailed as a historic milestone in Muslim?Christian?Jewish dialogue. Perhaps not since the early Middle Ages when the grand courts of Damascus, Baghdad, and Qurtubah (Cordova) witnessed numerous dialogues and debates between the adherents of these three Abrahamic faiths, has there been such a successful effort made by religious scholars to communicate with one another on matters of faith and understanding. This book, readers may note, goes beyond the modern?day ostensible studies in comparative religion, and each of the contributing scholars evinces an appreciation and more?than?cursory knowledge of all three faiths. The authors take up three major topics: The Other Faiths, The Nation?State as a Form of Social Organization, and The Faith?Community as a Transnational Actor for justice and Peace. Jewish, Christian, and Muslim contributors offer their respective enlightened views on the subjects discussed. THE EDITOR The late Dr. by Ismail Raji al Faruqi (1339-1406/1921-1986) is widely recognized as an authority on Islam and comparative religion. He was Professor of Religion at Temple University, where he founded and chaired the Islamic Studies program. Having studied or taught in the Middle East and Africa, as well as in Canada and the United States, Professor al Faruqi possessed the wide background of training and experience required for a thorough mastery of his field. His writings include numerous articles and books in both Arabic and English. Among his best known are Christian Ethics (1967), The Great Asian Religions (1969), Historical Atlas of the Religions of the World (1974), The Life of Muhammad (1976), Islam (1979), Tawhid: Its implication for Thought and Life (1982), and The Cultural Atlas of Islam (1986), which he co-authored with his wife Dr. Lamya Ibsen al Faruqi.

The Fragrance of Faith

Treaties on Zakat and Fasting

Turning the Tide:Reawakening The Womens Heart and Soul