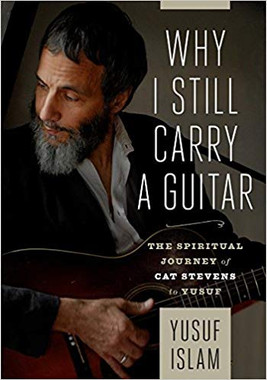 Why I Still Carry A Guitar: The Spiritual Journey of Cat Stevens to Yusuf

Why I Still Carry A Guitar is a memoir by legendary singer-songwriter and philanthropist Yusuf Islam, also known as Cat Stevens. The book is the gripping and often moving story of Yusuf Islam's journey from his life as a boy experiencing the dizzying heights of music superstardom, to a man defined by his faith who chose to give up music for over a quarter of a century, but has returned to deliver his powerful message of peace to the world of music and art. Why I Still Carry A Guitar is a remarkable work and like its author, transcends the East-West divide, telling the story of a unique man bringing worlds together against a backdrop of international politics, religion and the music industry. Key Features A memoir by Cat Stevens/Yusuf Islam, one of the greatest music icons of the last few decades A unique work that chronicles his spiritual journey to Islam Also available in Arabic About the Author Having sold over 60 million albums worldwide, and with an induction into the Rock & Roll Hall of Fame, Cat Stevens has secured his place in music history. At the age of 18, he had his first hit record, going on to achieve the kind of fame and success most can only dream about. He found his spiritual home in 1977 and went on to embrace a life of spirituality and charity, walking away from the music business to marry and raise a family. One of the world's most famous converts to Islam, Yusuf's pioneering work in education and humanitarian relief is recognized all over the world and he is also known as a promoter of peace, calling for greater understanding, tolerance and interaction between cultures. Yusuf lives with his family in Dubai, the UAE, and will soon be releasing a new album.