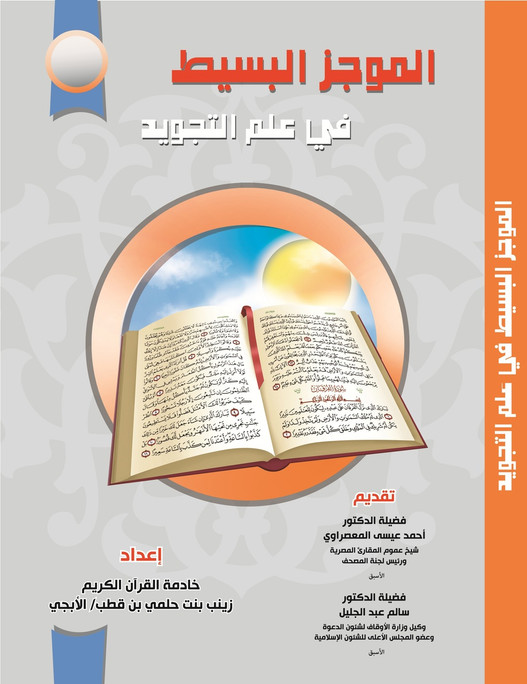 The learning, teaching and preserving of the Qur’an, the word of the Creator, is by far the greatest honor that could be bestowed upon any Muslim. Living in a day and age where exposure to the science of Quranic Arabic Pronunciation is harder and harder to find, access, and authenticate, it has become the responsibility of the knowledgeable to disperse the knowledge, and to the general Ummah to receive it

This revised and updated second edition of the Al-Mujaz al Basit fii Ilm Al-Tajweed, has been honored to receive the full-fledged support and endorsement from the esteemed Al-Azhar Al-Sharif as well as the endorsement of the highest living authorities in the science of Tajweed - the Honorable Sh. Ahmed Isa Al-Ma’asarawy, the Supreme Imam of Reciters in the Egyptian Lands and former President of the Mushaf Committee and Sh. Salem Abdeljaleel, Assistant Minister of Religious Endowments for Da’wah Affairs. This brief textbook contains a vivid and engaging description and elucidation of all the rulings of Tajweed, along with revised and updated texts, examples, and exercises that further develops the readers’ understanding, all vindicated by answered examinations attached to the textbook

Furthermore, the development of the DVD portion of the textbook contains extensive explanations to common misconceptions of Tilawah and mistakes that reciters could learn from with subsequent corrections, added to expressive animations of the physical locations of the origins of the letters with successive commentary. Also included in the DVD, is an engaging and vigorous learner-adapted and commentary-aligned recitation of Al-Fatihah and other chapter of the Qur’an, all at the utility of the student

Lastly, we have gladly produced to the service of the seeker of this holy knowledge, a complete, expressive video series of 100 episodes that go through all the rulings of Tajweed mentioned in the book, accessible on YouTube and other popular media-sharing venues through the entering of the names of the textbook or its author, or through the mentioned links at the end of the attached CD. The link to the series is: http://bit.ly/tajweedguide