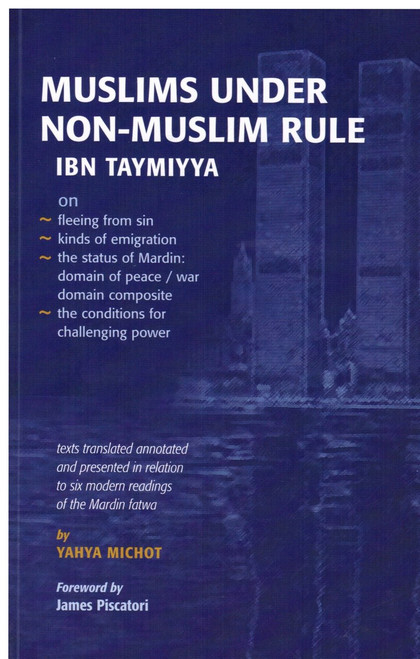 Modern Islamist ideologues often appeal to the authority of Ibn Taymiyya (d. 1328) -- according to the Militant Ideology Atlas more than twice as often as to Ibn ‘Abd al-Wahhab (of ‘Wahhabism’ fame). Many Western specialists also paint him as the godfather of uncompromising violent jihadism. In this book Michot overturns this conventional picture of Ibn Taymiyya. He presents close, careful translation of four fatwas by Ibn Taymiyya on how Muslims should respond when they come under non-Muslim rule: should they fight or quit such rule; if they should adjust to it, how and how far? Next, Michot translates passages from six modern authors reflecting on the same question, and referring to Ibn Taymiyya. Readers can judge for themselves how far modern militancy departs from the orthodox Islamic attitudes exemplified by Ibn Taymiyya. A detailed chronology of the life of this activist theologian shows that he practised what he preached. The Foreword by James Piscatori draws out the political implications of this stunning correction of the image of Ibn Taymiyya. It means that Islamic political activism need not be unintelligible, and response to it therefore needs to be more intelligent and nuanced than it usually is.

This book should be required reading for teachers and students of the overlaps between religion, politics, identity and culture in Political Science, Religious Studies/Theology, Middle East/ Islamic Studies, International Relations, Counter-Terrorism. (For a fuller account of its argument, go here.)

James Piscatori is a member of the Social Sciences faculty and the Centre for International Studies, Oxford University. Professor Michot, one of the Western world’s leading authorities on Avicenna and Ibn Taymiyya, is a member of the Theology faculty. Both are fellows of the Oxford Centre for Islamic Studies.