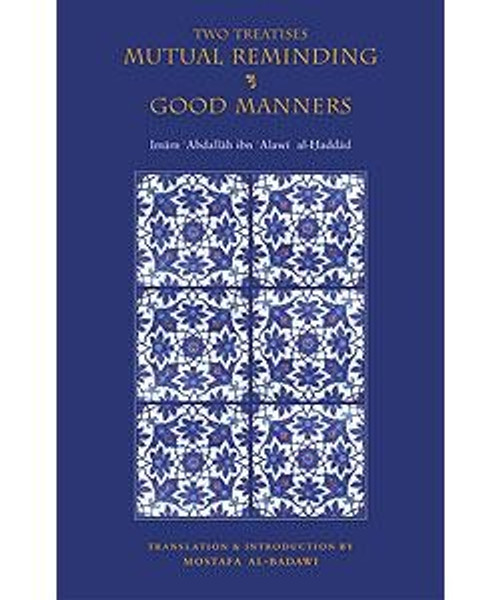 Two Treatises on Mutual Reminding and Good Manners Imam Abdallah ibn Alawi al-Haddad This volume contains two concise treatises of the venerable Imam al-Haddad. The first treatise, Mutual Reminding, distills the ethic and content of offering good counsel to one another. The chief elements of counsel, says the Imam, are taqwa (an active fear and consciousness of God) and detachment from the material world. These elements connect well with the topic of the second treatise, Good Manners, which discusses the manners recommended of the spiritual wayfarer as he or she takes the path to spiritual felicity. ABOUT THE AUTHOR: Imam al-Haddad Imam Abdullah ibn Alawi al-Haddad lived at Tarim in the Hadramawt Valley between Yemen and Oman. He is widely accepted as the mujaddid (or renewer) of the 12th Islamic century. He is a direct descendant of the Prophet (God bless him and grant him peace) through Imam al-Husayn. His illustrious ancestors, the Alawi sayyids, had for centuries produced generation after generation of great scholars, gnostics and summoners to the Straight Path. A celebrated scholar of the Shafii School of Jurisprudence, Imam al-Haddad was renowned for the breadth of his knowledge and the profundity of insight. He is also known for compiling litanies of dhikr taken from the Quran and the Prophet. These litanies are widely practiced all over the world. His influence on the Islamic world is reflected by the fact that his books are still in print and have been translated into many languages. He endeavored to produce concise and clear texts. His concern for brevity is manifest throughout his books, many of which are abbreviated adaptations of Imam al-Ghazalis monumental work, Revival of the Islamic Sciences (Ihya Ulum al-Din). Imam al-Haddad died in 1132 A.H., after having spent his life helping people draw closer to their Lord through the Imams personal teachings, written works, and his exemplary life. He was buried in a simple grave in a cemetery at Tarim. ABOUT THE TRANSLATOR: Mostafa al-Badawi Mostafa al-Badawi is one of the worlds premier translators of Islamic spiritual texts. He is a Consultant Psychiatrist and member of the Royal College of Psychiatrists. He studied under many shaykhs, foremost among whom is the late Habib Ahmad Mashhur al-Haddad. His other translations include: Book of Assistance, The Lives of Man, Key to the Garden, The Prophetic Invocations, and Degrees of the Soul. He is also the author of Man and the Universe: An Islamic Perspective, recently published by Wakeel Books. He resides in Madinah. Excerpt Those possessed of sound hearts and upright minds know that they will be requited for what they do in this life, that they will reap what they sow, that they will be judged just as they judge others, and that they are heading toward that which they have forwarded for themselves. How can such people not know this or fail to be certain of this when what they believe and trust in comes from what they hear in the perfect revelation of God and the utterances of His Prophet (peace be upon him)? They are sources that impart conviction and certitude in one whose heart God illuminates and whose breast He dilates. So be present of heart and attentive of ear and listen to what may awaken you from your heedlessness and rouse you from your slumber. Act well for your own good, and save yourself on a day when no wealth shall avail, nor children, save those who come to God with a sound heart (Quran, 26:88-89). . . . The Messenger of God (peace be upon him) said, The love of this world is the head of every sin. Moreover, it is at the root of every affliction, the origin of every calamity, the essence of every temptation, and the source of every hardship. Its evil has spread in these times and has become a grave danger, involving everyone. It is exhibited shamelessly as if it were not disgraceful and reprehensible. It has taken over the hearts of people and resulted in their excessive eagerness to work for the world and accumulate its debris. They roam about with their nets, fishing for suspect and illegal wares, as if God had made affluence in this world an obligation, just like Prayer and Fasting. . . . Know that the path begins when a powerful urge is cast into the heart of the servant which troubles and unnerves him, and drives him towards God and the last abode. It turns him away from this world and from being, like others, engaged in amassing and grooming it, tasting and enjoying its pleasures, and being deceived by its ornaments. This urge is one of the hidden warriors of God; it is a gift of solicitude and a sign of right guidance. It is often bestowed upon a servant as he listens to those people who stir in him the fear [of God] as well as desire and yearning [for Him], and when he looks at the men of God and they look at him. It can be given without cause. It is commanded and encouraged to actively subject oneself to receive such gifts, for to expect to receive something when not standing at the door and subjecting oneself therein is foolish and unintelligent. The Messenger of God (peace be upon him) said, Your Lord has gifts in these days of your time, subject yourself to receive them!

The Box of Manners

Good Character - A comprehensive Guide to Manners and Morals in Islam