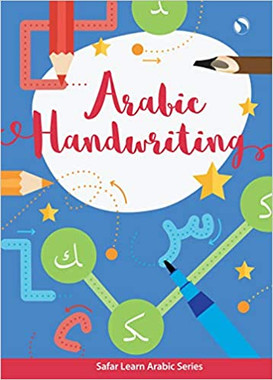 Arabic Handwriting is part of the Safar Learn Arabic Series. The aim of the book is to strengthen children’s familiarity with elementary Arabic penmanship by teaching them to write letters and words. This is the first book in the Safar Learn Arabic Series, wherein students learn to write and study verses of the Qurʾān and Aḥādīth of the Prophet صلى الله عليه وسلم. The book can also be used as an aid to the Safar Qāʿidah, whereby writing the Arabic script will aid students to learn and read the Qāʿidah fluently.

The Arabic language is an essential part of a Muslim’s life. For centuries, the recitation of the Qurʾān has been the primary goal for Muslims around the world and not much emphasis has been given on understanding and writing Arabic. The Safar Learn Arabic Series has been designed to fill this gap and help young Muslims better appreciate the sources of Islam: the Qurʾān and Sunnah. This will, in turn, positively build and shape their character and Muslim identity (tarbiyah) in sha 'Allah.

This book is intended to be used for two main purposes:
. 1.To teach students the very basics of Arabic writing. The end goal in this objective is that by the time they have completed the book, they should be able to correctly write a five-letter Arabic word from dictation.
2.To help students master letter recognition. The book will help students recognise simple letters and their forms (as it is in the Qa'idah, levels one to three) through learning to write them proficiently. It will also helps students familiarise themselves with complex letters and forms which are covered in level 4 of the Qa'idah.
Based on the above two objectives, this book is dual-purposed: it can be used as a workbook and supplement for students studying the Qaidah or it can be used as a beginners book for those who want to learn to write Arabic.