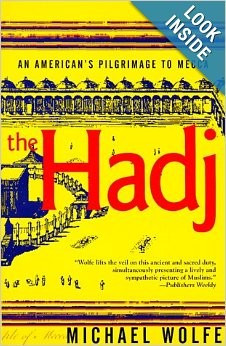 
From the Back Cover The Hadj, or sacred journey, is the pilgrimage to the house of God at Mecca that all Muslims are asked to make once in their lifetimes. One of the worlds longest-lived religious rites, having continued without break for fourteen hundred years, it is, like all things Islamic, shrouded in mystery for Westerners. In The Hadj, Michael Wolfe, an American who converted to Islam, recounts his own journey as a pilgrim, and in doing so brings readers close to the heart of what the pilgrimage means to a member of the religion that claims one-sixth of the worlds population. Not since Sir Richard Burtons account of the pilgrimage to Mecca over one hundred years ago has a Western writer described the Hadj in such fascinating detail.

"Wolfe lifts the veil on this ancient and sacred duty, simultaneously presenting a lively and sympathetic picture of Muslims." -Publishers Weekly

"The most engaging of travel books . . . his pilgrimage will move people of all faiths-and of none at all, because it describes a universal journey for meaning, transcendence and peace."-The Literary Review

"Wolfe has perhaps provided the clearest statement of an American Muslim since Malcolm X."-Journal of Near Eastern Studies

"It requires a special sensitivity to write well about the Hadj. . . . Michael Wolfes tone is exactly right."-The Times Literary Supplement

Michael Wolfe is the author of One Thousand Roads to Mecca: Ten Centuries of Travelers Writing about the Muslim Pilgrimage, as well as other books of poetry, fiction, and travel writing. He is also the publisher of Tombouctou Books. He lives in Santa Cruz, California.