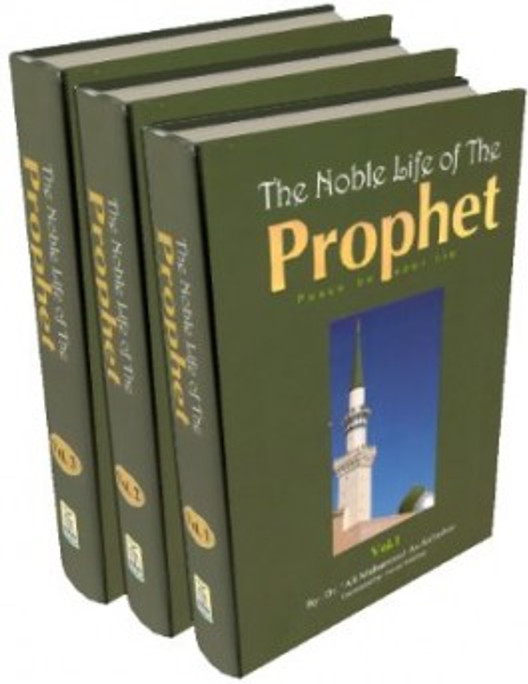 In this book, the events of the Prophets life, from the day he (S) was born and even before that day for background information-until the day he (S) died, have been recorded.

Beyond enumerating the events of the Prophets life, lessons and morals from those events have been drawn to point out the significance of an event and the wisdom behind the Prophets actions or deeds, the Islamic ruling that is derived from a particular incident, and the impact that a given event should have on our character or choice of deeds is indicated.

Male or female, adult or child, scholar or commoner, businessman or laborer - all Muslims need to study the biography of the Messenger of Allah. In fact, the fulfillment of many of our Islamic duties hinges upon our knowledge of the Prophets life. For example, every Muslim should love the Prophet (S) yet how can one love him without knowing him. We were not alive when the Prophet (S) was preaching the message of Islam to the Quraish, so the only way we have left to become intimately acquainted with the Prophet (S) and consequently to love him, is to study his sayings and deeds, which give us partial glimpses of his life, or to study his biography, which fits the pieces of his life together, so that we can have an overall view of his ideal character. And how are we to follow the Prophet (S) if we do not know his sayings and deeds, or - which is more relevant to his biography - the context in which his sayings and deeds occurred. Thus we are all in dire need of acquainting ourselves with the life of the Prophet (S)

Through the study of the Seerah (the Prophets biography), we are able to appreciate how the Prophet (S) was an ideal husband, ideal father, ideal leader, ideal ruler, ideal educator, ideal judge, and so on. So regardless of our situation and who we are, we benefit from studying the Prophets life. If one has dedicated at least some part of his life to inviting others to Islam (which makes him a Daaee - a word I will henceforward useÂ  one who invites others to the teachings of Islam), then the Prophets biography is for him an indispensable guidebook. Through studying the Prophets Seerah, the Daaee learns about the Prophets methodology for inviting others to Islam; furthermore, he learns about how the Prophet (S) dealt with those who refused to embrace Islam and how he ;t", was patient when he was made to suffer at their hands, not to mention the countless other lessons and morals he learns from the Seerah.

If one is an educator - of children at home or school, or of adults at a community level - one learns how the best educator mankind has ever known raised a generation of true Muslims, who went on to develop the most wonderful civilization that mankind has ever known. The early converts to Islam were educated in the worlds finest institution of higher learning - the House of Al-Arqam (the house wherein Muslims secretly met in the early days of Islam) - where the Prophet (S) taught them the Quran, Islamic beliefs, the manners of Islam, and so on. His students graduated with flying colors, becoming leaders and educators of the following generation of Muslims.

If one is a leader, one learns true qualities of leadership from the Prophets Seerah, in terms of how the Prophet (S) was just; how he united the Muslims; how he (S) dealt with subversive elements of society, namely the hypocrites, who were headed by Abdullah ibn Ubai ibn Salool; and how he (S) constantly strove for the betterment of the Muslim nation.

If one is a scholar, one relies on the Seerah to understand the Quran, for the Prophets actions represent a practical application of the teachings of the Quran. Furthermore, the revelation of many Verses was prompted by actual events that took place during the Prophets lifetime; a scholar can only understand such Verses if he understands the events for which they were revealed. And in fact (as we will In Sha Allah see throughout this book) knowledge of all Islamic sciences - such as Aqeedah (beliefs), jurisprudence, and Tafseer - hinges frequently upon knowledge of some aspect of the Prophets Seerah.

If a Muslim inclines towards Zuhd (to abstain from worldly pleasures for the sake of Allah) he can learn, through the study of the Seerah, the difference between true Zuhd and extremism, for the correct way to live is the balanced life that the Prophet (S) and his Companions led. If a Muslim is afflicted by calamity, he can find consolation in the Seerah, for no one was afflicted with as much hardship as was the Messenger of Allah; beyond consolation, the afflicted person becomes encouraged to follow the example of the Prophet; and patiently await for his reward from Allah . In short, there are valuable lessons to be found in the Seerah for every single Muslim.

Not just the Muslim individual, but also the Muslim nation as a whole needs to benefit from the lessons that are available in the Prophets Seerah. Nations rise and fall not through coincidence or through a set of arbitrary occurrences, but through universal laws that have been set in place by Allah . At least once in our history, Muslims have succeeded in building a wonderful and stable civilization, and that was during the lifetime of the Prophetand his rightly guided Caliphs; and even if Muslims prospered in later centuries, they never prospered as much as they did in the early golden years of Islam. Now we come back to the universal laws I mentioned above: The Prophet , and his Companions established a stable and prosperous nation not by chance, but by living in harmony with the said universal laws. What this means is that there is a pattern: If we want to now repeat the success that was achieved by the Muslims during the lifetime of the Prophet Oh, we need to be in harmony with the same set of laws, and in doing so, we have an ideal blueprint to follow - the lives of the Prophet (S) and his noble Companions (R).

Prophets of Islam in Noble Quran

The Biography of the Noble Prophet

The New Voices of Islam

The Niche of Lights

The Name and the Named

The Nightmare of Disbelief

The Noble Quran Transliteration in Roman Script with

The Miraculous Quran and Some of Its Mysteries

The Muslims in Spain